It was hard to fathom that Celtic's Europa League return with Lazio in Rome could finish any more dramatically than the meeting in Glasgow two weeks ago.

Back then, Christopher Jullien rammed in an 89th-minute header to earn Neil Lennon's side a priceless victory. But as the game reached the same stage on Thursday, it seemed as though a hard-fought draw would be the outcome.

Then Olivier Ntcham struck. Within seconds, Celtic would have a first ever victory in Italy and their place in the last 32 would be secured with two games still to play. Here's how those final few minutes unfolded...

'Forster is the love of my life' - Celtic hanging on

Let's be frank, Celtic would have happily taken a point from this game with a view to beating Rennes in a fortnight to qualify. But even that looked like it might be ripped from their grasp in a frantic final few minutes of this game.

Lazio, knowing they needed to redress the defeat in Glasgow, went hunting for a winner. Fraser Forster shovelled away a Valon Berisha effort. Then another from Felipe Caicedo. Then he flung out a massive hand to divert away a searing Luis Alberto strike before Sergej Milinkovic-Savic leathered one wide.

Celtic were sweating. Lennon responded by removing James Forrest in favour of a fifth defender, Moritz Bauer. There was one minute of regulation time left and the manager did not want to throw away a precious point.

Then came the goal, almost out of nothing. Despite having Celtic pinned to the halfway line, Lazio gifted possession to Odsonne Edouard deep into injury time.

The Frenchman suddenly found himself in a three v two situation, with Mohamed Elyounoussi and Ntcham to pick from. The former darted left, leaving space for Edouard to roll in his compatriot, who lifted a delightful dink into the net.

Celtic had gone from being under the cosh to leading in Rome in the blink of an eye. 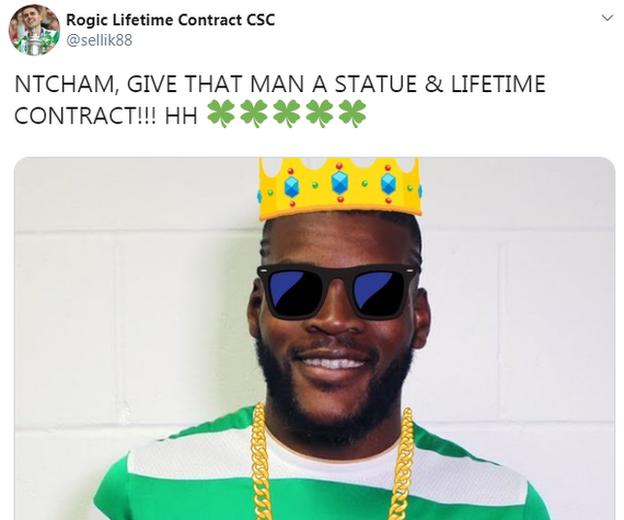 'What a result!' - the celebrations

Seconds later, the game was over. Celtic were into the last 32 with two group games to spare. The celebrations could begin.

Rod Stewart led the charge and even the president of Albania got caught up in the fun...