Arsenal midfielder Granit Xhaka could leave the club in January and Newcastle United are ready to make a move for the 27-year-old Switzerland international. (Times - subscription required)

Barcelona have expressed an interest in signing Gabon striker Pierre-Emerick Aubameyang, 30, from Arsenal and could make a bid as early as January. (El Chiringuito via Mirror)

Uruguay midfielder Lucas Torreira, 23, is set to hold talks next week over his future at Arsenal. (Mirror)

Manchester City manager Pep Guardiola, whose contract with the club runs out at the end of next season, is open to managing in Italy once his time with the Premier League champions comes to an end. (Times - subscription required)

Burnley and England U21 winger Dwight McNeil, 19, says he is focusing on his football rather than speculation linking him with Manchester United. (Mirror)

Manchester United, Tottenham and Wolves are in contention to sign Colombian forward James Rodriguez, 28, from Real Madrid in January. (El Desmarque - in Spanish)

Crystal Palace are monitoring the progress of Netherlands striker Wout Weghorst, 27, who has scored eight goals in 15 appearances for Wolfsburg so far this season. (Calciomercato - in Italian)

Why Premier League title rivals are 'near perfect'

Bayern Munich will not appoint Arsene Wenger as the club's new manager despite the former Arsenal boss expressing his interest in the position in a phone call with chairman Karl-Heinz Rummenigge. (Sky Sports)

Leicester City manager Brendan Rodgers says a fear of competition would not have been behind English striker Jamie Vardy, 32, not moving to Arsenal when the Gunners made a move for him in 2016. (Telegraph)

Southampton defender Cedric Soares says he will leave the club at the end of the season but the Portugal international, 28, wants to save them from relegation first. (Telegraph)

A former Manchester United and Juventus scout says he would "bet a pizza" France midfielder Paul Pogba, 26, will return to the Italian side. (Tuttosport, via Goal)

Arsenal and Scotland defender Kieran Tierney, 22, says it is down to the players on the pitch to fix the club's ongoing problems. (Telegraph) 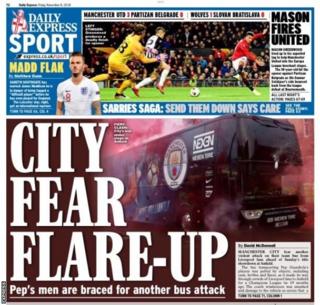