"Let's be honest, one of the most fun things in football is a goalkeeper being sent off and an outfield player having to go in goal."

BBC Radio 5 Live presenter Mark Chapman hit the nail on the head as he summed up the excitement which swept across the watching footballing world when Kyle Walker went between the posts for Manchester City.

First-choice goalkeeper Ederson was replaced at half-time of the Champions League match against Atalanta - and stand-in Claudio Bravo was then sent off.

Who would City turn to? Step forward defender Walker, who said he half volunteered, half was pushed into taking over the gloves.

All the gear, but any idea? Walker's first task was to save a free-kick from Ruslan Malinovskiy - which he did, just about. Fielded at the second attempt.

His save meant that he made more stops in the match than either Ederson or Bravo, and put him in decent company when it comes to English keepers in the Champions League...

There were huge cheers from the travelling support when Walker began to look the part. Bossing his defence around, coming to make a routine catch and then falling on the ball for no reason to eat up the clock.

Walker picked up a clean sheet and ensured that City took home a draw, and put himself on the map in the famous San Siro Stadium in Milan. 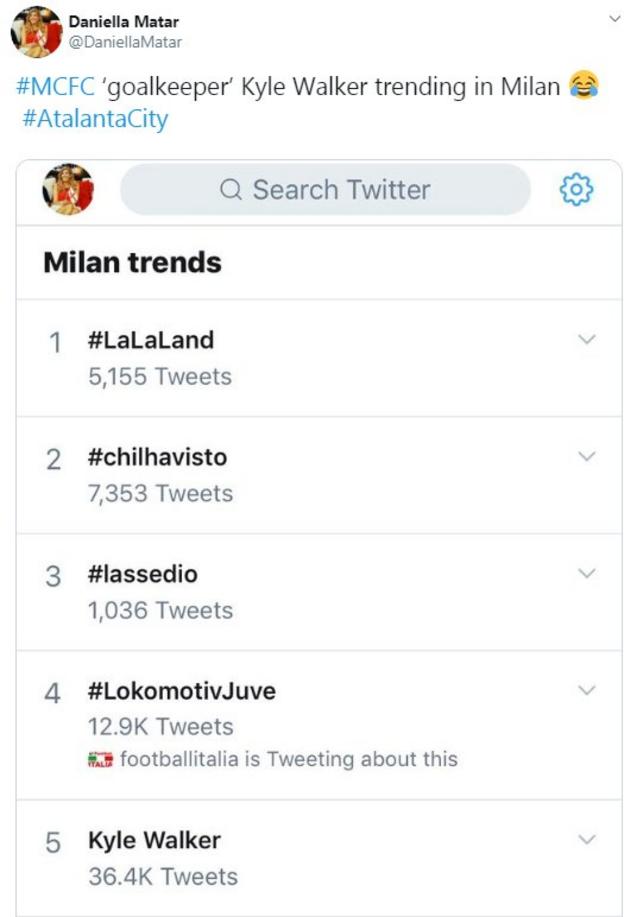 A new role at the club? Even if not all of his team-mates were totally convinced.

Have gloves, will fill in - five of the best 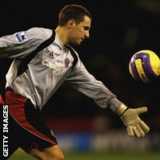 Neil Warnock often opted to avoid using a reserve goalkeeper on his bench at Sheffield United, leading to Phil Jagielka filling in on occasion.

The centre-back played half an hour in 2006 during the Blades' 1-0 Premier League win over Arsenal, in place of Paddy Kenny, making saves to deny Robin van Persie and Julio Baptista. 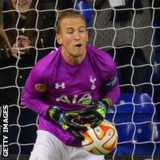 It was going well for Tottenham striker for Harry Kane, having already scored a hat-trick against Asteras Tripoli in the Europa League 2014, but it was about to take a turn.

After Hugo Lloris was sent off with three minutes remaining, a volunteer was required to go in goal, and Kane stepped up - only to blot his copy book by letting a tame shot from Jeronimo Barrales slip through his grasp and trickle into the net.

When Tomasz Kuszczak, Edwin van der Sar's injury replacement, was sent off for a foul on Milan Baros it was down to Rio Ferdinand to wear the gloves for Manchester United against Portsmouth in 2008.

Sulley Muntari smashed the subsequent penalty past the centre-back with aplomb as United were knocked out of the FA Cup at Old Trafford. 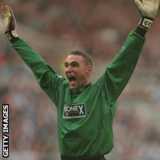 Wimbledon number one Paul Heald was sent off in the 57th minute and, with all three substitutes having already been made, a certain hard-hitting midfielder called Vinnie Jones took the plunge against Newcastle.

He conceded three goals in a 6-1 Premier League defeat at St James' Park in 1995. 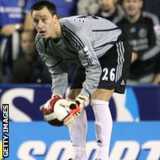 On the day that resulted in Petr Cech wearing a scrum cap for the rest of his career, John Terry played in goal for Chelsea after replacement Carlo Cudicini was also carried off on a stretcher.

The central defender filled the void as Chelsea beat Reading in the Premier League 13 years ago.