Former Arsenal boss Arsene Wenger is set to be offered the Bayern Munich manager's job until the end of the season. (Sun)

Bayer Leverkusen and Germany midfielder Kai Havertz is open to a move away from the Bundesliga. The 20-year-old is a target for Manchester United. (Marca, via Metro)

Manchester United boss Ole Gunnar Solskjaer says there "might be two" signings in January, but the club will do most of their business in the summer. (Evening Standard)

Chelsea could listen to bids for France striker Olivier Giroud, 33, and Spanish 32-year-old winger Pedro, while Spanish left-back Marcos Alonso, 28, is facing a fight over his long-term future at Stamford Bridge. (Telegraph)

Fenerbahce want to sign Pedro on a free transfer next summer. (Takvim, via Mail)

Pedro may look for a move in January with China also an option for the Spaniard. (El Dorsal - in Spanish)

Who are the 31 non-league clubs in action?

The future of West Ham director of football Mario Husillos is in doubt following the team's recent poor form. (Guardian)

Former Brighton boss Chris Hughton is not interested in taking over at managerless Stoke City as he hopes for a return to the Premier League. (Sun)

Former Red Bull Salzburg and RB Leipzig sporting director Ralf Rangnick has had talks with a Manchester United official about a role at the club. (Athletic, via Mirror)

Chelsea will not necessarily make signings in January even if their transfer ban is overturned, says manager Frank Lampard. (Talksport)

Inter Milan and AC Milan are in talks over a new £630m stadium nine miles away from the San Siro. (Mail)

Barcelona boss Ernesto Valverde still has the support of the club's board but there is increasing concern about how the team is playing. (ESPN)

More than 90% of Manchester United fans are not satisfied with the way the club is being run, according to a survey. (Telegraph)

The Premier League has introduced an app for players which is designed to help with their mental and physical wellbeing. (Mail) 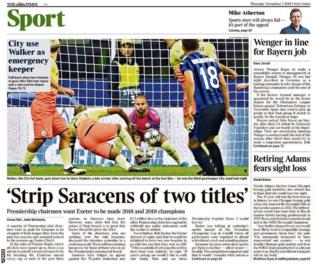