Spanish giants Barcelona and Real Madrid are both interested in signing Haaland. (Marca - in Spanish)

Arsenal could look to sell Switzerland midfielder Granit Xhaka in January after the 27-year-old was stripped of the captaincy. (Mirror)

Real Madrid manager Zinedine Zidane says it is Paris St-Germain and France striker Kylian Mbappe's dream to play for the Bernabeu club. (AS - in Spanish)

Can Liverpool fans do both? And which striker once played twice in a day?

Manchester United are monitoring the progress of Burnley's England Under-21 winger Dwight McNeil, 19 - having released him from their youth set-up five years ago. (Sun)

Aston Villa will turn down any offer made by United for Scottish midfielder John McGinn, 25. (Birmingham Mail)

Stoke City have made a move for Scotland manager Steve Clarke, who only took charge of his national team in May. (Sun)

Chelsea and England midfielder Mason Mount, 20, has played down comments from former team-mate Mitchell van Bergen that he could join Real Madrid or Barcelona. (Express)

Real Madrid have held talks with Napoli's Spanish midfielder Fabian Ruiz, 23, over a potential move to the Bernabeu next season. (ESPN)

Tottenham Hotspur manager Mauricio Pochettino says he is happy with Denmark midfielder Christian Eriksen's commitment, despite the 27-year-old being linked with a move away from the club. (Football London)

Argentina striker Mauro Icardi, 26, is doing "everything" to make his loan move at Paris St-Germain from Inter Milan permanent. (RMC - in French)

Rangers striker Alfredo Morelos, reportedly a target for Aston Villa, says he has had no contact with any club but the Colombian, 23, added: "Many teams would be offering a good amount of money for me." (Antena 2, via Birmingham Mail) 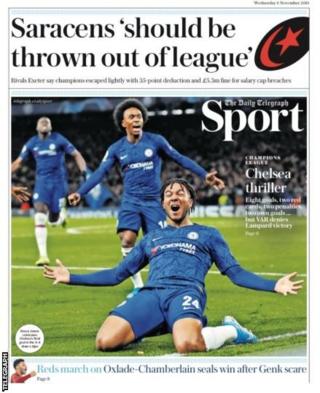