Not since 2008 has Scotland had two clubs competing in European competition beyond Christmas.

Celtic and Rangers are vying to set that record straight this season and they continue their Europa League campaigns on Thursday night.

Halfway through the group stage, both clubs occupy qualification spots after encouraging starts.

But can they see it through and what is the current state of play?

Celtic are a point clear of Cluj at the top of Group E after a pulsating 2-1 home win over Lazio on matchday three.

They travel to Rome to face the Italians again on Thursday knowing victory could secure their place in the last 32 with two games to spare.

A Celtic win at Lazio, coupled with Cluj avoiding defeat at home to bottom club Rennes, would send Neil Lennon's side through.

And even if the Scottish champions leave the Stadio Olimpico empty handed, they will still be confident of reaching the knockout phase for the third successive season.

One more victory should be enough and Celtic, having won both home games so far, host Rennes before ending the group away to Cluj, where they drew 1-1 in a Champions League qualifier in August. 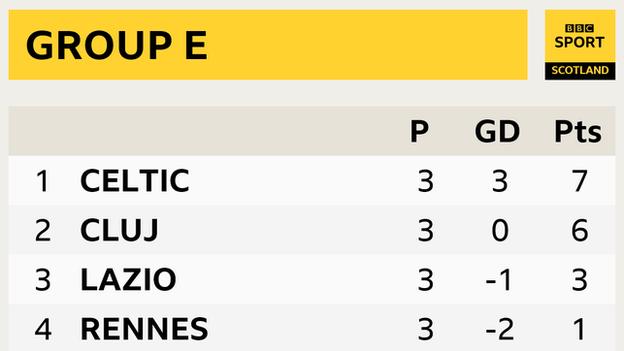 Steven Gerrard's side look in good shape to qualify with two of their final three fixtures at Ibrox, where they have won all five Europa League matches this season.

Indeed, Gerrard has yet to suffer a home defeat in the competition as Rangers boss, winning 10 and drawing three.

After a superb display earned them a 1-1 draw away to Porto last time out, Rangers host the Portuguese on Thursday seeking the win that could put them top of the standings, depending on the result of Young Boys' encounter at Dick Advocaat's Feyenoord.

And Rangers' hopes could all come down to the final fixture at home to Swiss champions Young Boys, who denied Gerrard's men a point in Bern with a 93rd-minute winner last month. 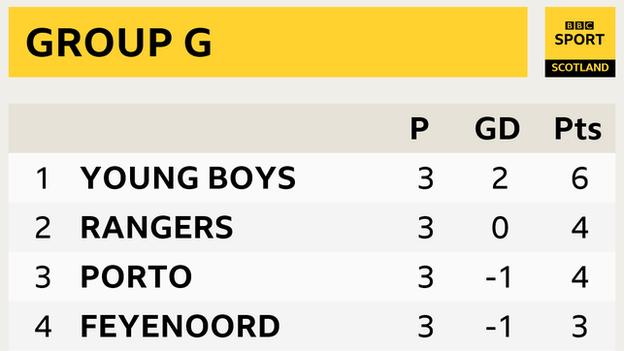 What the managers say

Celtic manager Neil Lennon: "What a game to look forward to. We know what a huge incentive there is to go there and get a result.

"Off the back of Saturday [League Cup semi-final win over Hibs], psychologically, the feel-good factor, the players will be in a good place.

"It is a titanic game in front of us, we know the calibre of opposition we have got on Thursday night but it is not beyond them."

Rangers manager Steven Gerrard: "I think that [draw in Porto] was our best performance in Europe for large parts. I'm not going to get carried away but that is a big point.

"That's the level we need to try and bottle, certainly if we want to get out of this group.

"That performance gets us something in Feyenoord if we can match that, and the home games will be very important."