Kieran Tierney has an "ongoing issue" that prompted Arsenal to ask for him not to be called up to the Scotland squad, says manager Steve Clarke.

Full-back Tierney, a £25m signing from Celtic, made his debut for the Premier League side in late September after double hernia surgery in the summer.

Scott McKenna and Steven Naismith both return for the Euro 2020 qualifiers with Cyprus and Kazakhstan.

"Arsenal asked us not to select him," Clarke said of Tierney.

"Kieran has an ongoing issue that Arsenal are keen to address in the next international break.

"It's a little bit frustrating. It's obviously frustrating for Kieran as well, but we've got good cover in that position."

Asked about the nature of the 22-year-old's issue, Clarke said: "That's a question for Arsenal."

Aberdeen defender McKenna and Hearts striker Naismith both sat out last month's defeat by Russia and victory over San Marino because of injury. 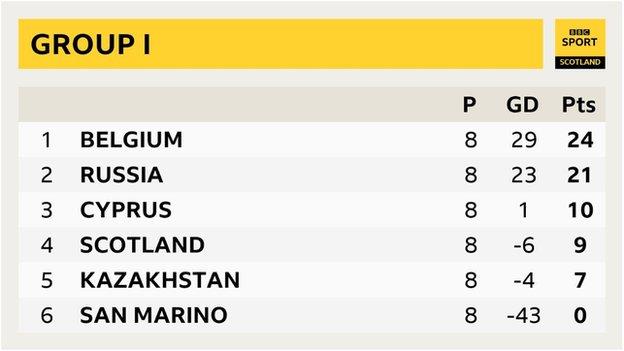 "Steven hasn't had much game-time but he's a good professional and assures me his fitness is good," Clarke said.

Scotland, who cannot qualify from Group I, face Cyprus away on 16 November then Kazakhstan at Hampden three days later.

Clarke's side can still reach the finals via the play-offs in the spring, and the Scotland manager has made finishing third in the group a "minimum requirement", with Cyprus a point above his side.

He insists the final two qualifiers are not a time for "experiments" as he seeks to build momentum and cohesion for the play-offs.

*On loan from West Bromwich Albion