Chelsea boss Frank Lampard will have up to £150m to spend on players in January if their transfer ban is lifted. (Telegraph)

Manchester United and Liverpool have also been linked with Werner but his club say they do not intend to let the 23-year-old leave. (Mirror)

Manchester United have made West Ham United and England midfielder Declan Rice, 20, their top target for next summer - but he may be brought to the Old Trafford club as soon as January. (Goal)

Hammers boss Manuel Pellegrini is under pressure for the first time in his 18-month tenure at London Stadium. (Sun)

The footballers who fled from the Stasi

How two friends risked everything for a new life in the West...

Chelsea have entered the race for Lyon's French striker Moussa Dembele, 23, with the former Celtic player also a target for Manchester United.(Mail)

Former Chelsea and Manchester United boss Jose Mourinho would be interested in taking the vacant Bayern Munich manager's job, according to former Germany midfielder Bastian Schweinsteiger, who played for the Portuguese at Old Trafford. (Evening Standard)

Ex-Arsenal manager Arsene Wenger is among Bayern's list of candidates to replace their former boss Niko Kovac, who left the Bundesliga champions at the weekend. (Guardian)

Meanwhile, Erik ten Hag has confirmed he will be staying at Ajax amid reported interest from Bayern Munich.(Talksport)

The Foxes and Newcastle United are interested in signing Senegal striker Habib Diallo, 24, from French side Metz. (Express)

Magpies and England midfielder Jonjo Shelvey, 27, is set to become the next senior player to sign a new contract with the St James' Park club. (Northern Echo)

Manchester United will remain without France midfielder Paul Pogba, 26, for at least another four weeks because of his ankle injury. (ESPN)

United have rejected a bid of £13m from Roma for England defender Chris Smalling, with the 29-year-old on a season-long loan deal at the Serie A side. (Star)

Wolverhampton Wanderers are preparing a £13m bid for Atalanta's Swedish midfielder Dejan Kulusevski, 23, who has also been linked with Manchester City and Arsenal. (Sport Witness)

Tottenham Hotspur have offered England Under-20 defender Japhet Tanganga a new deal to prevent the 20-year-old leaving at the end of his existing contract next summer. (Football Insider)

Arsenal have parted company with head of youth scouting Steve Morrow - who scored the winning goal in the 1993 League Cup final before breaking his arm in the celebrations - as part of a planned restructuring of the club's academy. (London Evening Standard) 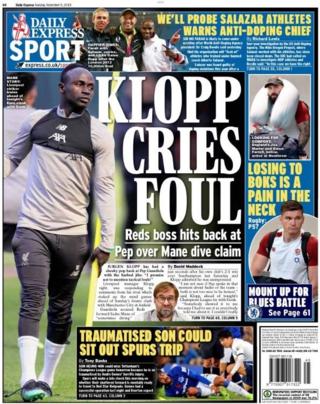 The back page of the Express