England midfielder Adam Lallana, 31, is a target for clubs in China and Major League Soccer, with his Liverpool contract running out this summer. (Telegraph)

Unai Emery has been given a month to save his job as Arsenal manager. (Mirror)

The Gunners are distancing themselves from a possible move for former Manchester United and Chelsea boss Jose Mourinho. (ESPN)

Assistant manager Freddie Ljungberg is ready to step in as caretaker manager if Emery is sacked by the Emirates Stadium club. (Independent)

Former Juventus coach Massimiliano Allegri, previously linked with Arsenal, is the favourite to take over at Bayern Munich following the departure of Niko Kovac. (Bild, via Football Italia)

Whose pass was out of this world?

Garth Crooks' Team of the Week

Red Bull Salzburg are yet to receive an offer for 19-year-old Norway striker Erling Braut Haaland, who has been linked with Manchester United, Real Madrid and Juventus. (Mirror)

Barcelona's 21-year-old Spanish midfielder Carles Alena - a target for Tottenham Hotspur - is likely to be allowed to leave the La Liga club on loan in January. (Mundo Deportivo - in Spanish)

Roma are set for further meetings with Manchester United over a permanent deal for England defender Chris Smalling - who is on loan at the Serie A side this season - and are ready to offer 10m euros (£8.6m) for the 29-year-old. (Calciomercato)

Netherlands coach Ronald Koeman has confirmed there is a clause in his contract allowing him to move to Barcelona, where he played from 1989 to 1995, but only after Euro 2020. (Goal.com) 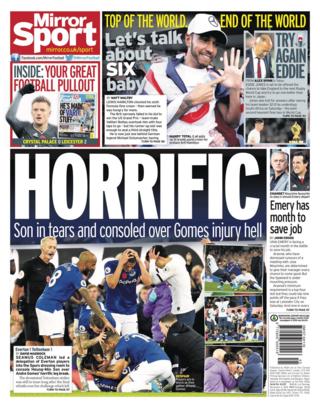 In the Daily Mirror, "Emery has month to save job"