Leicester are bidding to become the first Premier League club to make a move for Metz and Senegal striker Habibou Diallo, but Newcastle are also interested in the 24-year-old (Express)

Swedish striker Zlatan Ibrahimovic, 38, currently playing in the MLS for LA Galaxy but linked with a return to Manchester United, is likely to return to another of his former clubs, AC Milan. (Marca)

AC Milan are expected to end their interest in Gremio's Brazil forward Everton Soares, 23, who has also been linked with Tottenham. (Calciomercato)

690-mile round trip and no football to watch

Five things you may have missed from the EFL

Barcelona and Manchester City are set to compete for the signing of Uruguay and Juventus midfielder Rodrigo Bentancur, 22. (Star)

Arsenal boss Unai Emery brushed off questions about his future following his team's draw at home to Wolves. (Express)

Barcelona will allow Spanish midfielder Carles Alena, 21, thought to be a target for Tottenham, to leave the club on loan in January. (Mundo Deportivo, via Mail) 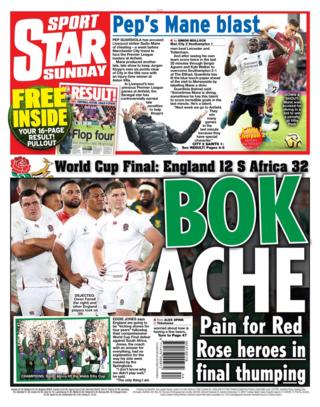 In the Star on Sunday, "Pep's Mane blast"