Aberdeen made it three wins from three as they moved into third in the Scottish Premiership by defeating Ross County at the Global Energy Stadium.

After a difficult start to the season for Dons boss Derek McInnes, his team have now won four out of the last five.

Josh Mullin had scored an early penalty for Ross County.

But Niall McGinn and Ryan Hedges both netted free-kicks, before Andrew Considine scored a fine third goal from the edge of the box.

That moved them two points clear of Motherwell, albeit having played a game more than the Lanarkshire side.

Despite the defeat, Ross County hold on to sixth spot in the table.

Looking at the league table pre-match, you could be forgiven for thinking both teams were doing okay. County went into this game holding a position in the top six, while Aberdeen had an opportunity to go third. But both feel they have something to prove this season, and the desire to show they have more in their lockers produced a sparkling 90 minutes.

For the second week in a row County were ahead early. After Michael Gardyne's cross was handled on the edge of the box by Lewis Ferguson, Mullin drove home from the penalty spot. It was a change of luck for the Highlanders - back at Pittodrie in August they were left reeling by a harsh penalty call that went against them, before Billy McKay also missed from the spot later in the game.

Their lead lasted just five minutes, though, before McGinn levelled through a smart free-kick. County's Ewan Henderson was caught out in the wall by the decoy run from Hedges, and Northern Ireland international McGinn was able to send the ball through the gap.

Ross County had conceded 16 goals in their last five games, but they defended stoutly as Aberdeen tried to wear them down with a series of high balls into the box. As much of a nuisance Sam Cosgrove and Greg Leigh were, they were finishing second best to every aerial duel.

Yet the home defence were posted missing at the second goal. Hedges' free-kick from out wide was missed by everyone, with goalkeeper Ross Laidlaw slow to react as the ball was allowed to drift into the far corner.

The game continued to be lively. Hedges jinked into the box and cut-back to Cosgrove who had the ball taken off his toes a yard from goal. The action then swung to the other end and Sean Kelly played a one-two before drilling low at Aberdeen goalkeeper Joe Lewis.

County then had the ball in the net from a Henderson free-kick, but Ross Stewart was adjudged to be offside as he slid it in.

But Aberdeen continued to be the main aggressors, and they stretched their lead with a wonderful strike from Considine on his 499th appearance for the club.

The defender could have been denied his moment of glory had referee Alan Newlands handed the visitors a penalty when Cosgrove appeared to have the legs taken from under him. Instead, play raged on and the 32-year-old collected the ball on the edge of the box and deftly curled it inside the near post.

Ferguson hit a long-range shot against the outside of the post and McGinn had a free-kick tipped over as the visitors pushed for a fourth, with McInnes' men now beginning to look like their old selves. 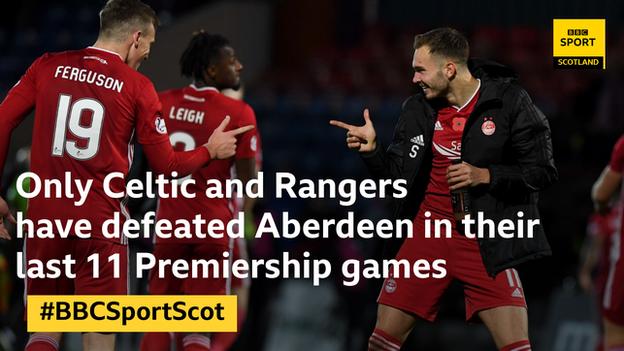 Man of the match - Niall McGinn

His stunning free-kick on the edge of the box drew the match level, but as well as scoring the Northern Irishman was also extremely effective throughout for the visitors; pressing and frustrating the hosts as he continued to get decent balls into the area.

Although Aberdeen went on to add another two goals to the scoreline, McGinn's opener for the Dons without doubt came at a vital time and helped to ensure Aberdeen took all three points.

"I don't think we can question the players effort and endeavour. There was a lot of things that really pleased Stuart [Kettlewell] and I today."

Aberdeen manager Derek McInnes: "The only disappointment today was not getting a third clean sheet in a row, but I think that was down more to a poor refereeing decision [for the penalty awarded against Lewis Ferguson]. We've had handballs not been given much more blatant than that. I'm not convinced it was in the box.

"Our trademark has always been long winning runs in every season we've had. To go three wins in a row hopefully we can continue that when we come out of the international break."