A Christian Doidge hat-trick inspired managerless Hibernian to just a second Scottish Premiership win of the season as they routed St Johnstone in Perth.

Scott Allan also netted as Eddie May began his second stint as caretaker boss with a resounding victory.

Stevie May grabbed a late consolation for 11th-placed St Johnstone.

The sorry home side have the joint-poorest defensive record in the top flight, shipping 28 goals in their 12 matches.

Former Liverpool forward Harry Kewell was among the McDiarmid Park spectators, describing the Hibs vacancy as "an option" before taking in the trouncing dished out by the visitors.

Eddie May made five changes to the side that was humbled 5-2 by Celtic in the League Cup semi-final, reinstating Florian Kamberi to the line-up, meaning Hibs would play with two strikers.

His decision was vindicated with just two minutes gone, as Kamberi played Doidge in from inside the box to open the scoring. The Welshman needed two attempts to put the ball past Zander Clark, gleefully tapping home to score his first league goal since a summer move from Forest Green Rovers.

And the visitors could've doubled their lead just minutes later after Joe Newell cut inside from the right and curled a left footed effort off the far post, but it wasn't to be.

However they made their dominance count soon after. Just 15 minutes after his first goal, Doidge grabbed his second after more good work from Kamberi on the right flank. He carried the ball to the bye-line and crossed low for Doidge to flick beyond the helpless Clark.

St Johnstone laboured in the first 45 minutes, and whatever boss Tommy Wright said to his side at half-time didn't have a great effect. Allan added a third for the visitors just three minutes into the second half.

The 27-year-old picked up the the ball just inside the opposition half and breezed his way into the box unchallenged before driving a low left-foot effort across Clark and in.

The contest was effectively over at that point, but 10 minutes later, Doidge added a fourth to claim his hat-trick. The striker leapt highest to meet a Jason Naismith cross from the right, and his powerful header left Clark with no chance.

Hibs paid around £300,000 for the striker, and having only scored two goals in 15 previous appearances, the trio of strikes will come as a welcome boost.

Hibs could have had more. Efforts from Kamberi and Melker Hallberg whistled past either post, but it was beleaguered St Johnstone who grabbed the final goal of the game, Stevie May finishing from close range in the final minute, denying Hibs just a second clean sheet of the Premiership season. 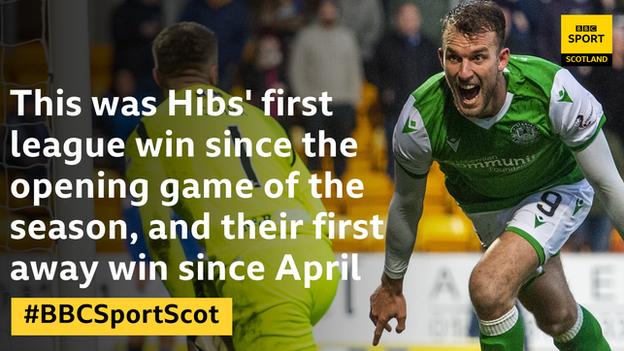 Man of the match - Christian Doidge

Hibs looked like a team transformed, and Christian Doidge was a player transformed.

So often he has been the fall guy for the capital club this season. Not today, he looked dangerous and confident, everything you want in a striker.

The hat-trick was a fitting reward for a fine display, and he could have scored more.

Plenty of food for thought for the new Hibs manager, whoever that turns out to be.

'They played with freedom and style' - reaction

St Johnstone manager Tommy Wright: "We emphasised the point of trying to be on the front foot then we gift them the first goal inside the first couple of minutes. I thought Hibs were good particularly first half, but we can't give goals away like the first and third and expect to win games."

Hibernian caretaker manager Eddie May: "They played with a freedom and style - and more importantly, with real quality. It's not a case of them playing for me, they were playing with professional pride."