Hamilton Academical held on for over an hour with 10 men to claim a Scottish Premiership point at Kilmarnock.

Accies raced into a two-goal lead thanks to wonderful strikes from Mickel Miller and Steve Davies.

But Sam Stubbs' straight red card and Mohammed El Makrini's goal on the stroke of half-time turned the game.

Though Eamonn Brophy equalised early in the second-half, they could not find a winner with Brophy hitting the post late on.

Killie remain in fifth place, while Accies drop down to 10th in the table after wins for Hearts and Hibernian.

That was Brian Rice's view of his side's draw at Rugby Park, and it's hard to argue with him.

Things could not have started much better for Hamilton at Rugby Park. Miller's half-volley inside the first two minutes is a genuine contender for goal of the season, even at this early stage. Davies' left-footed drive from outside the box would have been the goal of the game in most matches.

Killie had offered very little, only the energetic performance of Brophy provided a small glimmer of hope of getting back into this. The visitors looked very comfortable and in control.

That was until the 29th minute. A bouncing ball caused confusion in the Accies defence 35 yards from their goal. Brophy, who looked sharper than anyone else on the pitch all afternoon, managed to get his toe to the ball just before Stubbs, whose attempt at winning it proved costly. He connected with the Kilmarnock forward's knee, with referee Gavin Duncan deeming it a clear goal-scoring opportunity with a red card flashed.

That was the moment the game changed, and frustratingly for Rice, it was totally unnecessary. Though it was a split-second decision from Stubbs to go for the ball, a red card was far more detrimental than allowing Brophy a chance at goal - if he even made it to the ball before it reached Owain Fon Williams in the Accies goal.

It is a theme all too familiar for Accies this season. It's their fifth dismissal in the league this season after 13 games. Four of them have been straight reds. Rice says they're getting used to playing with 10 men. "We're getting men sent off all the time," he says. Though that sounds rather casual, he knows it is something they must address.

They may have come away from this game with a point, but that was only due to the resilience of Fon Williams. The Welsh keeper was at fault for El Makrini's goal, in which the midfielder hit a tame effort from the edge of the box, only for it to squeeze through him and into the back of the net.

He could not have done much about Brophy's equaliser just after the break - an emphatic volley into the roof of the net after Gary Dicker kept a corner alive at the back post.

The hosts continued to make use of their extra man and Brophy looked likely to score a winner, but Fon Williams denied him on three separate occasions. He also stopped substitute Simeon Jackson from point-blank range. It was an inspired second-half performance. 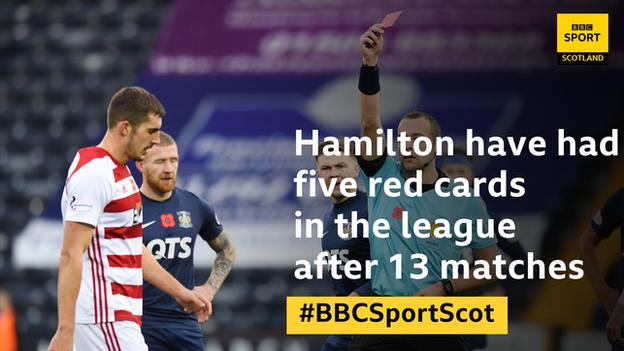 For Killie, it's the reverse view. When considering they were two goals down, it's one point gained. But when considering they played against 10 men for the best part of an hour and were not able to score in the 40 minutes which followed Brophy's equaliser, it's two points dropped.

The silver lining is that they have avoided a third consecutive league loss. They have lost ground on Aberdeen, however, who beat Ross County and move into third, while Motherwell are four points clear of them in fourth place and have a game in hand.

Accies are in a far more precarious position after the day's fixtures, with Hearts and Hibernian both winning and moving above them.

Man of the Match - Gary Dicker

Gary Dicker started the game in midfield but when Alex Bruce went off injured he reverted to central defence. With Accies down to 10 men the Killie captain pushed forward, cajoling his team, linking the play in their search for the elusive victory. Eamonn Brophy was a contender for his work-rate and goal, although he couldn't find a winner after being denied three times by Fon Williams.

Mickel Miller's terrific opening strike made him an early contender if only for the technique in connecting and firing the ball past Branescu, but Dicker was the most impressive player on show.

Kilmarnock manager Angelo Alessio: "I'm angry because we could've done better. We conceded two easy goals and played 60 minutes with 11 against 10. A lot of mistakes were made. I feel like we lost two points."

Hamilton manager Brian Rice: "We seem to be getting players sent off all the time, and it's not for malicious things, it's wee things. It's something we need to look at and address, but it doesn't take away from the spirit and the will power of the boys not to get beat."