Saints twice levelled through Jonathan Obika and Danny Mullen but it was not enough to lift them off bottom spot.

Bright starts in both halves proved the Paisley club's undoing, as MacPhee's men tried to blow away their struggling visitors.

To St Mirren's credit they responded well in the first half, but toiled in terms of creativity after Walker slotted in the host's fourth at Tynecastle.

This had the feel of make-or-break afternoon for interim Hearts manager MacPhee. A win would surely keep him in the running as a contender for the job on a full-time basis, anything else and those credentials would look decidedly flimsy.

Hearts would get off to the ideal start. Andy Irving took the corner, a low ball across the six-yard box and Naismith made a run across goal to apply the perfect finish to guide the ball past the St Mirren goalkeeper. On a perfect wintry day in Edinburgh, Tynecastle rose in unison. Joy and relief the emotion from the home faithful, hopeful this would be the shape of things to come.

But Hearts stalled as St Mirren struck back. After a run and shot from Stephen McGinn was batted away by Joel Pereira, the ball was hoisted high into the Hearts box. Tony Andreu supplied the knockdown header for Obika, who fired high into the net as the Hearts defenders appealed for an offside flag.

Would MacPhee's Hearts have the resolve to respond? They would, with a lot of help from Uche Ikpeazu. From a throw-in, the big striker turned in the box and aimed across goal. The ball took a deflection off defender McLoughlin and the ball found itself in the back of the net as Hearts hit the front again.

So far so good for MacPhee, but Hearts resilience would be tested again as St Mirren demonstrated their own.

In truth. the second St Mirren equaliser would be all about Christophe Berra. Inexplicably, the Hearts captain decided not to deal with a simple long ball which Mullen raced on to before finishing calmly past Pereira to make it 2-2.

As Tynecastle struggled to draw breath, Hearts would show their resolve again. This time right-back Michael Smith supplying the cross and at the back post Bozanic rose highest to head home and make it 3-2 to the home side at half-time.

It would get even better for MacPhee's side straight after the break. Smith again with a ball into the box and this time Walker with the header into the corner of the net to make it 4-2 as the home side strengthened their grip on three points.

That goal seemed to floor St Mirren as the game took a slight lull from the goalfest we had been treated to, but there was more to come. Substitute Mulraney collected the ball on the left wing. A couple of stepovers took him to the edge of the area where he unleashed the perfect curling shot right into the top corner to make it 5-2.

Hearts keeper Pereira produced a fine save to deny McLoughlin's strike which looked en route to the top corner late on, but by then the points were in the bag for the home side. A much-needed home win for Hearts, their first in the league for seven months. St Mirren go into the international break bottom of the table. 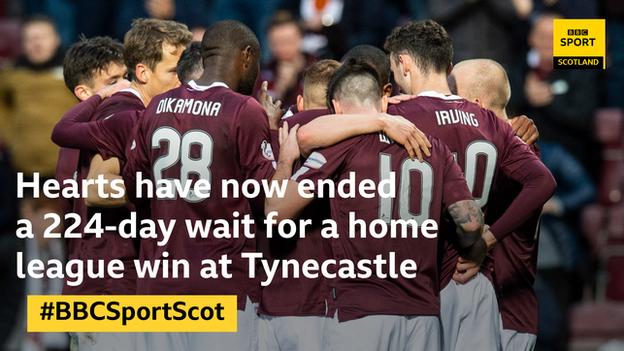 Man of the match - Steven Naismith

So much has been said about how important Steven Naismith is to Hearts. The Scotland international was in from the start and led from the front throughout, opening the scoring for the home side.

The narrative about this match was all about the impression Austin MacPhee would make as he continued in interim charge of Hearts, but there was no doubt about the leader on the pitch. Naismith never stopped talking, constantly coaching his team-mates throughout the game, offering advice to all and sundry while at the same time constantly providing a threat to the St Mirren back line.

'We need to kick on' - reaction

Hearts caretaker Austin MacPhee: "I thought we were very positive, there was a lot of energy in the team and we attacked a lot. We were delighted to get five goals in the league for the first time since August 2016.

"We need to kick on from here and not be complacent. Across the board there were a lot of very good performances."

St Mirren manager Jim Goodwin: "It was an incredibly bad day the office.

"I've been full of praise for the players in terms of how we've been organised in weeks gone by but today we were a shadow of that."