The Highland side sit four points behind Dundee United as they host the league leaders on Saturday.

United and city rivals Dundee have the largest budgets in the second tier.

"One thing about football is that you get there on football ability - it's the quality of the players on the park," Robertson told BBC Scotland.

"It's not always your wage bill, as Livingston and Hamilton have shown. The rest of us all relish the fact that, while maybe we don't have the money, we'll find good players, play good systems and good football and find a way."

Caley Thistle, who in the past relied on shareholder gifts to keep float and operate debt-free, recently held an emergency meeting in a bid to attract investment in the face of a projected annual loss of £872,000.

United this week confirmed a recorded loss of £3.7m but continue to have the backing of American businessman Mark Ogren.

Similarly, Dundee's American owners - Tim Keyes and John Nelms - have injected large sums of cash into the side.

"Financially, both desperately need to be involved in the Premiership again," Robertson said. "If you go along with budgets then there would only ever be two or three teams in each league challenging each other.

"That's part of the challenge - not only are you pitting your wits against good managers, you're up against the might of the spending thing as well."

Robertson admits investment does give the Dundee clubs an advantage even though he expects the Dens Park club to follow their city rivals by posting a financial loss.

"You imagine both Dundee teams will strengthen in January and go for the big push," said the 55-year-old former striker. "The Premiership is huge for both and they'll want to get back, but I can assure you, ourselves and Ayr, Queen of the South, Partick, everyone, will be doing our best to ensure we get out." 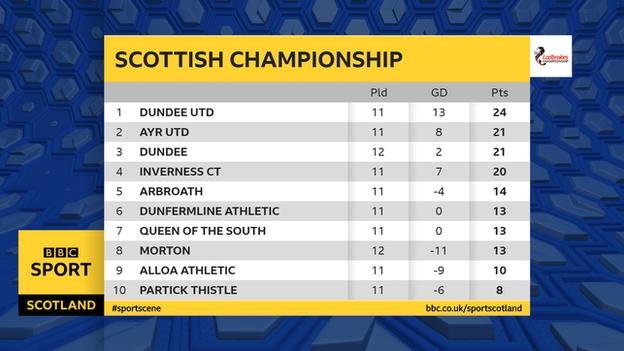 Despite United's current lead, Robertson believes the title race is wide open with other clubs just as "passionate" about winning promotion.

"If you go into the last nine games of the season, the final push, within a few points of the top you've got a real opportunity to go up and that's potentially when nerves can kick in," he added.

"You can't get away with mistakes, you can drop points here and there just now, but when it gets to the nitty gritty, that's when, from our perspective, you hope the pressure starts to tell on the team above you and they start to fail."