The result means Rangers sit joint top of Group G along side Young Boys of Switzerland with two games remaining, while Porto and Feyenoord are three points behind.

It was yet another showing of strength in Europe under Gerrard, who has only lost three times - and never at Ibrox - across 26 matches in continental competition.

Rangers, who drew 1-1 with Porto two weeks ago, now go to Rotterdam on 28 November before welcoming Young Boys to Ibrox two weeks later in their final group game.

Sitting contently at the top table in the Estadio do Dragao media room two weeks earlier, the Rangers manager beamed about what he had just witnessed from his team.

Fielding questions from the assembled journalists, Gerrard could not hide his pride after Morelos' equaliser had cancelled out Luis Diaz's opener to keep Rangers in the hunt in this group. "I think that was our best performance in Europe for large parts," he said. "I'm not going to get carried away but that is a big point."

While this showing, particularly in the first half, may not have been Rangers' best, the devastation wreaked on one of Europe's big names in a ruthless second half may well be causing some of the club's support to be reaching for the 'let's get carried away' button.

Not for the first time, Rangers faced a daunting task under a dark sky in Govan, only to send a household name away beleaguered and bemused into the chilled night. Spartak Moscow. Villarreal. Legia Warsaw. Feyenoord. And now Porto. All have come to Glasgow, all sent away again without even scoring a goal.

Plenty has been made of the European ties across the city at Celtic Park. And rightly so. Yet there is something fascinating about watching Rangers on these evenings. For a group largely untested at this level prior to last year, there is a swagger and courage to their play.

Against Sergio Conceicao's men, they survived an early scare to at least make the first half competitive, before fearlessly dictating the play once they had their noses in front.

Gerrard stuck with the same team which caused Porto so many problems in Portugal, although they were forced to ride their luck in the opening stages, Glen Kamara showing his acrobatic side to clear Pepe's glanced effort off the goal line. Conor Goldson would smash a ball clear in the second half, as well.

At the other end, Rangers struggled to show composure in the final third, a mixture of shots and crosses nestling somewhere in the Broomloan Road end. But after the break, flickering moments hinted at a spark coming with Pepe going off early for the visitors.

Ryan Kent was proving to be a nuisance. Past one player he turned. Then another. Then came the shot from the edge of the area. The save by Agustin Marchesin triggered a corner and rumble of hope in the stands.

And then the moment came. Courageous play from James Tavernier on the right led to the ball being nudged to Ryan Jack. Rangers' man of the moment did not fail, his cross from the right finding its target. Morelos allowed it to run across his body at the edge of the area with the merest of first touches.

As Ibrox held its breath, his left foot met the ball on the half volley just before it floated out of reach to arrow a shot across Marchesin and in. Ibrox erupted. Morelos roared back in a primal outpouring of emotion.

If one nearly lifted the roof, the second moments later almost launched it into orbit.

Morelos was the provider, this time out on the left. A pinpoint cutback was gathered 20 yards out by Davis. The Northern Irishman launched an effort on target, but the telling nick off of Ivan Marcano - the man who was rolled for the first - sent the ball careering by the stranded Porto goalkeeper.

There was nowhere for Porto to go. No way of Rangers letting this one slip. Another big European night at Ibrox. Now on to Feyenoord, and another foreign experience for Gerrard to potentially savour. 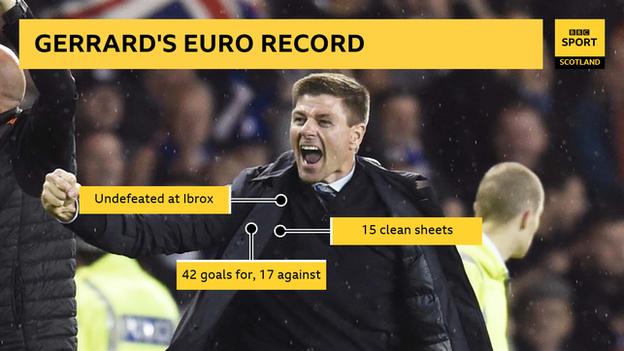 Man of the match - Alfredo Morelos

It seems like an easy option, but with a goal and an assist, there is only one winner.

There was plenty industry in the middle of the park, particularly from Davis and Jack, with the latter continuing to embrace life at Ibrox this season.

Again, though, it was Morelos' intervention that turned this game on its head. He earned Rangers a point in Portugal, and it was his clinical ability to create space and guide his volley at goal that set the teams apart in Glasgow.

That's 11 goals in Europe this season. While Gerrard says he's not for sale, Rangers' resolve may well be tested soon enough.