A fan whose bet netted him £20,000 when Leicester City won the Premier League as 5,000-1 outsiders has backed them to win the title again this season.

But this time Leigh Herbert had to make do with "measly" odds of 300-1 on the Foxes to repeat their fairytale triumph of three years ago.

Herbert, 41, believes the current squad - currently fourth in the table - is at least as good as the one that triumphed in 2016.

"Liverpool or Man City might prove to be too strong for us, but you never know," carpenter Herbert told BBC Sport.

"There's definitely the same kind of buzz around Leicester."

Leicester won at Crystal Palace on Sunday to stay within eight points of leaders Liverpool.

Herbert, who went to his first Foxes game aged 10, says the last few years have been "an incredible rollercoaster".

Leicester finished 14th in their first season back in the top flight in 2015 and then won the league under Claudio Ranieri the following year.

Ranieri left after a poor start to the next campaign and was followed by Craig Shakespeare and Claude Puel before Brendan Rodgers' arrival in February heralded a revival.

Last month, the Foxes stormed to a record 9-0 away win at Southampton in the week they marked the anniversary of the death of owner Vichai Srivaddhanaprabha in a helicopter crash. 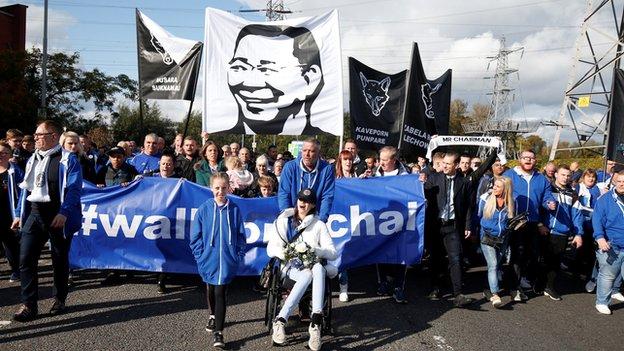 "It's been an absolute rollercoaster of emotions over the last few years. There have been some massive ups and the lowest downs," said Herbert.

"Vichai came in and had a vision for the football club, and did so much for the city through charity work. What happened last year was absolutely devastating."

'Leicester fans are loving the team'

Four years ago, Herbert put a fiver on the Foxes at 5,000-1 in pre-season after a few drinks on holiday in Newquay, Cornwall. He cashed out some of the wager, but collected the rest.

"I was going to put a deposit on a house but in the end it became quite stressful waiting to see what would happen, so we decided to just enjoy it," he said.

"I bought my missus a car and went on a big holiday."

"I'd probably get about £7,500 if they finished top, but as a Leicester fan - even if I hadn't had a penny on it - I would be just as happy that we'd won the Premier League," he said.

"Leicester fans are loving the team under Brendan Rodgers. We lost some key players since winning the title but have made some unbelievable signings."