Rangers will face holders Celtic in their first final since 2016 after dismantling managerless Hearts in the last four of the Scottish League Cup.

Steven Gerrard's side lost at this stage last year, but a Filip Helander strike and Alfredo Morelos' second-half double ensured the Rangers boss will lead them into the first final of his tenure on 8 December at Hampden.

MacPhee took charge on Thursday, after Craig Levein was sacked with Hearts 11th in the Scottish Premiership, but his team never looked like extending Rangers' recent run of last-four disappointments.

The Ibrox club had lost at this stage on five consecutive occasions in the domestic cups, but they will now have a chance to claim a first major prize since 2011 and deny Celtic a 10th trophy in a row.

MacPhee may have surprised his Gerrard with the omission of Uche Ikpeazu just two weeks after the striker caused the Rangers defence all sorts of problems in the sides' 1-1 Premiership draw at Tynecastle, but it did not take long for the game to settle into a familiar pattern.

Rangers midfielder Ryan Jack, in particular, looked in the mood as he thundered into challenges, with Hearts defender Michael Smith feeling the full effect early doors.

Jack, who recently extended his contract, was involved in all that was good about Rangers play. His sweeping ball out to James Tavernier was then sent across the Hearts six yard box, with Smith clearing just as Morelos was about to tap into the empty net.

Hearts goalkeeper Joel Pereira had already saved well from Jack - Morelos knocking the rebound wide - before he was once again was called into action to save a Glen Kamara effort.

The pace of Ryan Kent was also evident as Hearts struggled to get any grip at all in the match as wave after wave of Rangers attacks continued.

The Tynecastle side were forced into an early change when influential midfielder Glenn Whelan had to come off with a hamstring injury. It was a huge blow for an already struggling side. 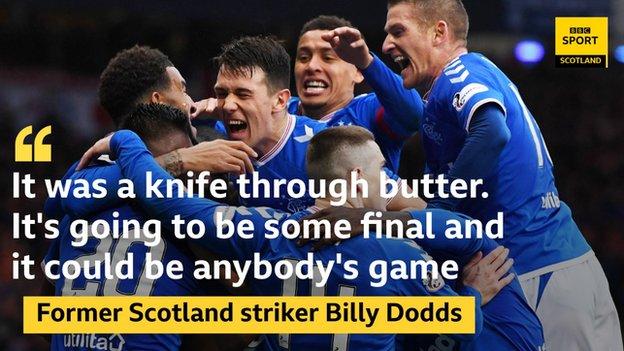 Referee John Beaton was also a busy man with yellow cards dished out to Steven MacLean and Sean Clare after rash challenges on Connor Goldson and Borna Barisic respectively.

Indeed, MacLean was possibly fortunate not to receive a second yellow when he came close to connecting with goalkeeper Allan McGregor. MacPhee was taking no chances, though, and quickly decided to haul him off with Ikpeazu coming on.

The Rangers surge towards the Hearts goal continued unabated, with Kent denied again, this time his strike hitting the outside of Pereira's left-hand post.

And, just as the board was being raised to indicate how much stoppage time would be played, Rangers made the breakthrough. A corner was cleared but only as far as Morelos, whose teasing delivery found Helander in yards of space to finish smartly.

It was no less than the Ibrox club deserved after a 45 minutes of dominance and, within two minutes of the second half starting, Rangers' place in the final was all but secured.

The Hearts defence were spectators as the Tavernier fired the ball across the six-yard box towards Morelos, who had a simple task of knocking home from close range.

The goal could have knocked the stuffing out of Hearts but, to their credit, they rallied with Ikpeazu and Craig Wighton both coming close.

Steven Naismith then was introduced for the first time since August in place of Smith, who had taken a knock just before half-time.

There was no relenting in Rangers pressure, though, with a Jack volley eventually cleared by Pereira and Morelos finding the side-netting.

But there was no missing the target just after the hour mark as the Colombian netted the third. Kent showed Clare a clean pair of heels before cutting back for the striker to score his second.

Many of the Hearts fans began to head towards the exit as Morelos thought he had scored number four, only for the flag to be raised for offside.

Joe Aribo, Scott Arfield and Jermain Defoe were all brought on, with Kent, Sheyi Ojo and Jack making way, no doubt with Thursday's Europa League game against Porto in mind.

The game fizzled out as Rangers searched for a fourth goal but the Ibrox players would be more than happy with their day's work.

For Hearts, whoever the new manager will be has a huge job on his hands with few players on the day showing anything like their true form.

This was a thoroughly professional performance from Rangers, with Morelos once again putting in a fair shift and being amply rewarded with his two goals.

Kent was another that caught the eye with his pace and trickery, but the award must go to Jack. The midfielder is learning from one of the best in the world in manager Gerrard and will be a key asset in the weeks and months to come.