Celtic won their 30th consecutive domestic cup tie - beating Hibernian in a frantic game at Hampden - to set up a Scottish League Cup final in December with either Rangers or Hearts.

Neil Lennon's side, winners of this competition for the past three seasons, were comfortable by the break after Mohamed Elyounoussi's brace either side of goals from Callum McGregor and Melker Hallberg.

Captain Scott Brown scored twice in the second half, with Florian Kamberi's consolation in between proving futile.

The defeat does little to ease the pressure on Hibernian boss Paul Heckingbottom. Although this was a first loss in seven matches, the Englishman's side have not won in 90 minutes since 3 August.

For Celtic, though, victory means they will compete for their 10th consecutive domestic trophy in the final at this venue on 8 December.

Celtic ease into fourth final in a row

In truth, few would have envisaged any outcome other than the one that unfolded at Hampden. Hibernian's results have been wretched, with the Easter Road side without a regulation win in 13 games, while Celtic have lost just twice in 25 outings this term.

And that expectation was franked inside the opening quarter as the holders roared into a two-goal lead. Celtic had claimed unsuccessfully for a penalty when Elyounoussi's corner cannoned off the arm of Paul Hanlon but the reprieve lasted just a few seconds, the Norwegian attacker heading in a James Forrest cross from six yards out.

And a second followed in short order, French striker Odsonne Edouard gambolling onto a Kris Ajer ball, shimmying into the box, and nudging inside for McGregor to finish from close range.

At that stage, it appeared that a humiliation could be visited upon Hibs. Heckingbottom's side were shambolic defensively and allowed Celtic to play at will. Each time they advanced, a goal looked likely.

But for all their troubles, there is some resolve in this Hibs team, who came back from two down at home to draw with Livingston in midweek. They hinted that a repeat might be possible when they hauled themselves back into the semi-final by taking advantage of some Celtic sloppiness. The ball squirmed from a Boli Bolingoli challenge into the path of Hallberg, who slid past Fraser Forster.

That flash of hope disappeared almost as soon as it arrived, though. Edouard once again was the provider, this time unselfishly setting up Elyounoussi to force in for a 3-1 interval lead. 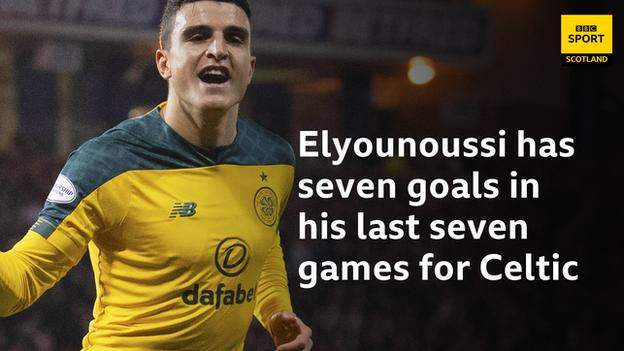 Something had to change if Hibs were to have any chance of winning a place in December's final. Kamberi came on for midfielder Josh Vela - while Celtic swapped Bolingoli for Jonny Hayes - but the alteration could not stem the tide.

Elyounoussi scudded an angled effort against an upright and Forrest did likewise, before Celtic killed the tie. Hibs goalkeeper Chris Maxwell came to claim an Elyounoussi corner but, perhaps spooked by the presence of Christopher Jullien, he spilled the ball into the path of Brown, who gleefully rammed in.

Kamberi delivered an immediate retort, adroitly glancing in a teasing Tom James ball, but it did little to dampen the Celtic celebrations. And those were amplified further when Brown exchanged passes with Elyounoussi before fizzing a strike beyond the exposed Maxwell at the second attempt.

Hibs proved no match, then, for Celtic. Can either Rangers or Hearts prevent them taking the first step to a potential quadruple treble in next month's final?

Man of the match - Mohamed Elyounoussi

Kamberi made a positive impact for Hibs when he came on and was by far the most effective player for the Easter Road club, but his performance did not compare with several by Celtic players.

Forrest, Brown and Tom Rogic barely put a foot wrong, and when you add the terrific abilities shown by Edouard, the Parkhead club were always in command.

But the award must go to Norwegian Elyounoussi, who put in his best performance since joining the club. If Lennon can somehow persuade the powers at be to make the deal permanent, Celtic will have a talent that is rarely seen in the Scottish game.

Shots on Target
Home2
Away9