Motherwell held on to third place in the Scottish Premiership with a hard-fought 2-1 victory over Livingston.

A late strike from Allan Campbell kept Stephen Robinson's side ahead of Aberdeen, the midfielder latching on to a loose ball with seven minutes to go.

Chris Long put the hosts ahead in the second half when Matija Sarkic fumbled in his shot at the front post.

Steven Lawless then equalised from the penalty spot after Devante Cole brought Scott Tiffoney down in the box.

The late winner knocked Livingston out of the top six, with Ross County leapfrogging Gary Holt's side after a 2-2 draw with Hamilton Academical.

Livingston have not won in Motherwell for 17 years, and the home side's extension of that record means they have now won four of their last six matches - a run of form which may have Hearts casting envious glances in the direction of manager Robinson this week.

Imagination, skill, entertaining football. None of those were in evidence in a first 45 which slipped from the memory during the shrill blast of the referee's whistle that brought it all mercifully to a close. With both sides well aware of the qualities of the other, this had more the feel of a stand-off than a stand-out match in the top half of the table.

Every now and again, though, little moments of quality gave the paying punters hope amid the general gloom. Livingston could, arguably should, have taken an early lead when Tiffoney was gifted a more than presentable chance, only for home defender Declan Gallagher to show sharper instincts and time a tackle to perfection.

Tiffoney was the main goal threat for the visitors, and a clever twisting run past a couple of defenders put him in pole position to fire off a shot which Mark Gillespie did well to turn round his right-hand post.

At the other end, Livingston coped well with most of Motherwell's threat. The best chances for the hosts were from distance, with a clever corner leading to a Liam Donnelly shot which was blocked by a defender, before Long's powerful, swerving effort brought the goalkeeper Sarkic into action pretty much for the first time.

His involvement in the opening goal will haunt him, even though Halloween's now behind us. Long's shot was decent but should have been easily dealt with. Instead, the ball somehow made its way through Sarkic before trundling over the line.

A reprieve would come at the other end, though, as a clash of two strikers brought the penalty from which Livingston drew level. Cole's tangle with Tiffoney had referee Euan Anderson pointing to the spot. Lawless was brought on, and the sub's first involvement was to convert the perfect penalty.

Then the sucker punch from Motherwell. A shot from outside the area found Campbell inside it; his touch was true, as was his shot, finding the corner of the net for a very valuable home win for Motherwell, as their fine start to the season shows no signs of slowing up. 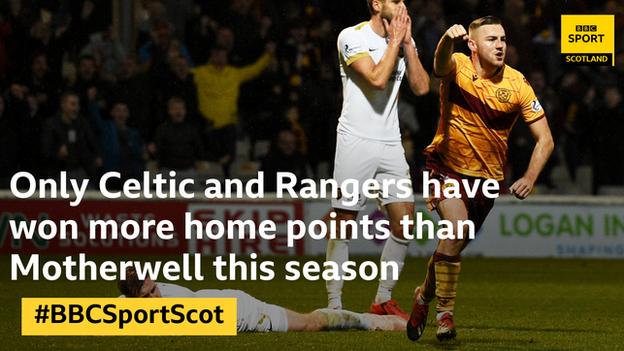 Man of the match - Allan Campbell

For the decisive goal, and a hard-working performance in midfield, Campbell gets the award. Alongside Donnelly and Liam Polworth, much of what was good for Motherwell came through him, and when he was required to keep his nerve at the decisive moment near the end, he duly obliged.

Livingston will feel hard done by - they probably did enough to merit a share of the points, with Tiffoney a constant thorn in the side of the Motherwell defence. But this is a big win for Motherwell, who'll now do their utmost to hang on to their manager Robinson, whose stock continues to rise.

'Not a great game but a good performance' - reaction

Motherwell manager Stephen Robinson: "A great result, not a great game, but I thought it was a good performance. We kept the ball on the ground, we were patient and we thoroughly deserved the win.

"Livingston put balls in to your box from every area of the pitch and you have to scrap and battle. If there were question marks it was whether we could stand up to that. We certainly did."

Livingston manager Gary Holt: "I thought we were well in the game. We coped with a lack of squad depth and I thought the boys were excellent.

"We have to see games out, we have to be more professional and at times do the ugly side really well. I can't stand here and keep praising my team for being unlucky. We have to learn from it."