Ross County edged into the top six of the Scottish Premiership after Brian Graham's late strike rescued a draw against Hamilton Academical.

The Dingwall side had led within the opening minute, Billy Mckay snaffling a goal after Owain Fon Williams fumbled.

Hamilton responded, though, Lewis Smith and George Oakley scoring within 12 minutes of each other after the break.

However, Graham netted in the 89th minute, before Scott Martin was sent off for Accies in stoppage time.

The late equaliser still leaves County without a win in their last six, while Hamilton move up to eighth despite continuing their winless run of five.

Honours even in gritty affair

This game had gritty written all over it, and the first half certainly was. But these are the sort of games both sides would look at as real opportunities to pick up valuable points.

Although most of the first half was kitchen-sink drama, the start was decidedly box office as County took the lead after just 30 seconds. After some shambolic Hamilton defending Lee, Erwin fired in a shot that Fon Williams spilled into the path of Mckay, who stabbed the ball in.

For the rest of the half, County goalkeeper Ross Laidlaw was a virtual spectator, Hamilton showing a real lack of quality as an attacking threat. The best they could muster was a Sam Stubbs header from a corner over the bar.

County were having the better of it and had a penalty appeal waved away as Ross Stewart was bundled over by Alex Gogic. Stewart also sent an effort wide as County underlined their dominance.

Hamilton's young team looked leaderless in the first half, so at half time the experienced Steve Davies entered the fray. He almost immediately fired in a free kick from 20 yards just wide, but better was about to come from one of the club's academy graduates.

Smith did brilliantly to cut into the box from the right, beating Richard Foster, and he kept his composure to fire past Laidlaw. Hamilton were back level, the 19-year-old with his third goal of the season.

The hosts were looking much more up for the fight in the second half and they would get their reward as they took the lead. Smith this time with the assist and Oakley with the strike to make it 2-1.

The football on show improved as the match entered the final few minutes, and County would hit back thanks to a flowing passage of play. Michael Gardyne raced down the left wing before cutting the ball back perfectly for substitute Graham to finish expertly.

Martin was shown a late red for the home side after exchanging words with the referee and County almost won it from the resultant free kick, but Stewart's effort was blocked as Accies held on for the point. 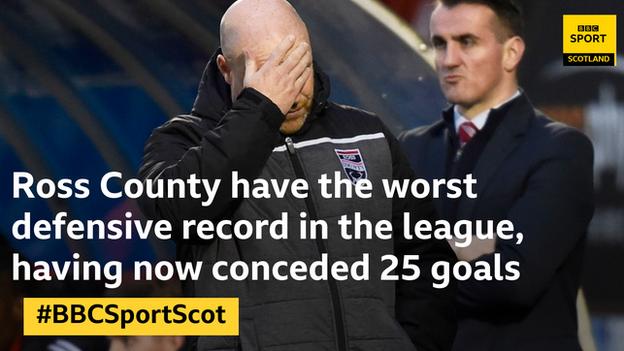 Man of the match - Lewis Smith

No doubt about it. Smith is just 19 years of age but is making a real difference for his side, and involved in both goals.

The lifelong Accies fan scored and assisted for Oakley in a victory against Kilmarnock earlier in the season, and did the same today in this draw.

The challenge now for him and the rest of the Hamilton youngsters is to do it week in, week out.

'We deserved to win' - reaction

Hamilton Academical manager Brian Rice: "I think it's a total injustice that we didn't win the game. We have had total possession of the football until the last 10 minutes.

"We've had chances, numerous set plays. In my opinion - only my opinion - I thought we deserved to win the game."

Ross County co-manager Stuart Kettlewell: "There's a bit of disappointment from us. We're really happy with the point we got last week at Easter Road being two goals down.

"It's hard to be too critical on the players because it's another late goal to get us a point away from home but I think there has to be that degree of disappointment because I don't think we hit any kind of level up until that second goal in the second half."