Aberdeen end a run of three home games without a win but remain in fourth place, a point behind Motherwell.

Cosgrove headed in a Niall McGinn cross and Scott McKenna put the visitors out of their misery.

Kilmarnock had not lost in their three previous visits to Pittodrie but slip four points behind the victorious hosts.

Thursday's opening of Aberdeen's new £12m training complex had given the whole club a lift and they will have received a further boost the moment they were handed the opposition team lines.

It was hardly surprising that Kilmarnock started full of uncertainty and they were given no chance to bed in as they were so easily undone within 10 minutes. Lewis Ferguson swung in a cross that was missed by the head of Dicker and Main was left unmarked to dive low to send the ball low into the corner.

A dose of confidence pumped into his chest by his first Aberdeen goal since signing from Motherwell, Main was also involved in his side's second.

His neat back-heel set up Cosgrove for a shot that was deflected over, but the big striker's 16th goal of the season was only delayed by seconds as he rose to head powerfully through the arms of goalkeeper Laurentiu Branescu from McGinn's cross after a short corner.

With Eamonn Brophy, Liam Millar and Chris Burke back in the side, Kilmarnock had plenty of forward threat on the park, but their problem was working the ball anywhere near the home penalty box.

Goalkeeper Joe Lewis was tested by a long-range Alan Power shot and got his nose painfully in the way of a close-range Dicker header when the stand-in centre-half ought to have reduced the arrears from a Burke free-kick.

However, having only scored 10 goals in their previous 11 Premiership games, it was always going to be a tall order for Alessio's side to recover - especially so considering they had to draft three academy players on to the bench.

They could have suffered a heavier defeat as Aberdeen finished with a flourish.

Cosgrove fired off a post, was unfortunate not to win penalties from unwise challenges by Stephen Hendrie and Wilson, Branescu saved well from Connor McLennan, while Wilson headed a Ferguson shot off the line - all before McKenna fired in the third from close range. 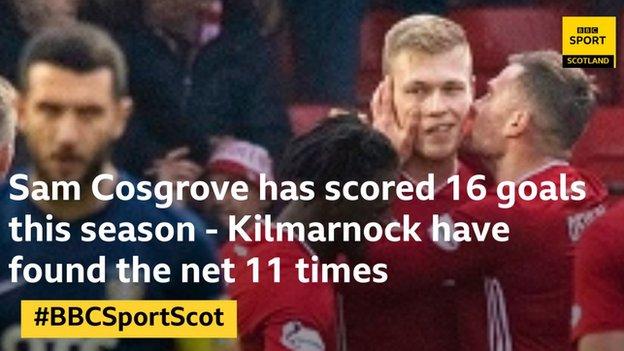 Man of the match - Curtis Main

It is fair to say Main has not made the impact Derek McInnes would have wanted so far at Pittodrie, but the Englishman certainly did against Kilmarnock. The goal - the striker's first for the club - was top drawer in terms of the finish but also in terms of the awareness he showed to lose his marker in the first place.

However, his performance was about more than just getting his name on the scoresheet - a lot more. There was the trademark robustness, but that was allied to a fair amount of quality too, McInnes will be hoping for more of the same over the coming weeks.

Aberdeen manager Derek McInnes: "I was delighted we capped our good performance with three goals and it should have been more, but we'll take that against a side that don't ordinarily concede many.

"We went with a front two. You've got to look at the opposition and they were up against it with injuries and suspension at centre-back and we tried to take full advantage of that."

Kilmarnock manager Angelo Alessio: "We knew it was going to be a very difficult game as we came here without several players in the centre-back position.

"We just have to forget this game. We have built our season on the defensive line, but we were without four centre-backs and we tried Dicker and Wilson, but they are out of position."