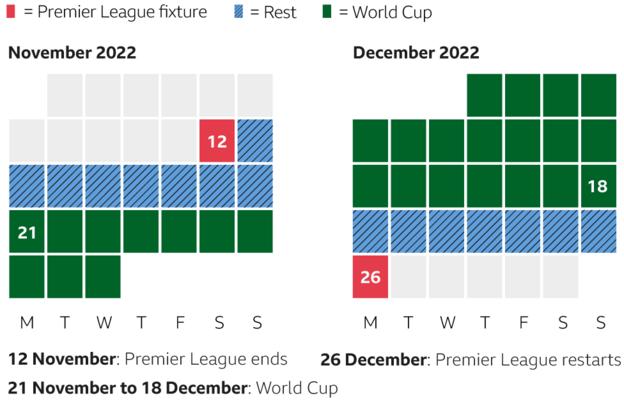 Premier League players could face the prospect of playing games nine days before the start of the 2022 winter World Cup in Qatar.

Draft plans have been shared between clubs outlining the Premier League schedule around the tournament, being held from 21 November to 18 December.

Fixtures could take place on 12 November and resume on 26 December, eight days after the final.

The season would also kick off one week earlier and finish a week later.

It means that there would be only six weekends without Premier League games.

The issue will be discussed at the next Premier League shareholders' meeting in November.

It is understood that Championship games will not take place during the World Cup, but the break for the second tier might not be as long as in the Premier League.

Leagues One and Two will continue during the tournament.

Any such proposals would clash with national associations' plans, given they usually allow several weeks for their players to prepare for the tournament.

A winter break will be introduced to the Premier League for the first time this season in order to give players a rest.

But it has been suggested that will be scrapped in the 2022-23 season, raising questions about player fatigue.

Uefa has said a decision on the scheduling of that season's Champions League and Europa League will not be made until 2021.