Liverpool captain Jordan Henderson said an "improved mentality" under Jurgen Klopp helped them come from behind to beat Tottenham and restore their six-point Premier League lead.

Harry Kane scored within 48 seconds of kick-off and keeper Paulo Gazzaniga pulled off a number of impressive saves to give Spurs a 1-0 lead at half-time.

Henderson equalised six minutes after the break before Mo Salah thumped the winner from the penalty spot.

"Our mentality has improved. That's grown over the last few years and the gaffer has changed that so much," Henderson told Sky Sports.

Liverpool have dropped just two points in the Premier League this season and are unbeaten at home in 45 league games.

"We have faced adversity at times. It's not always going to go your own way," Henderson added. "After 48 seconds I was thinking it was my fault because I gave the ball away for their goal. Thankfully I managed to get a goal to make up for it."

Liverpool were made to work for the victory, needing several big chances to score before Henderson eventually slotted his half-volley into the far corner early in the second half.

That came moments after Son Heung-min had smacked the crossbar for the second time in the match - his first effort was nodded in by Kane from seven yards out for the opener.

But Liverpool's pressure eventually took its toll when Serge Aurier caught the back of Sadio Mane's leg and gave away a penalty, which Salah smashed past a stationary Gazzaniga with 15 minutes left.

Salah was substituted in the 85th minute with a recurrence of the ankle injury which kept him out last week's draw against Manchester United at Old Trafford, but manager Klopp said "it's not a massive issue".

Liverpool finished the first half a goal down despite having had 10 shots on target and 76% of possession.

That was largely down to Gazzaniga's excellent display for Spurs - the keeper making 12 saves.

His first big save came after 20 minutes when Salah's half-volley was hit straight at him before the Egyptian struck another shot which he palmed away.

Gazzaniga got back to his feet to block the rebound from Roberto Firmino and then tipped Virgil van Dijk's header over the crossbar - all in the first 30 minutes.

Trent Alexander-Arnold joined in on the action, again being denied by Gazzaniga, before Mane missed the biggest chance of the half - skewing a header wide from just a few yards.

But the Spurs keeper, filling in for the injured Hugo Lloris, could do nothing about Henderson's equaliser or Salah's penalty which flew past his outstretched left leg.

What it means for the title race 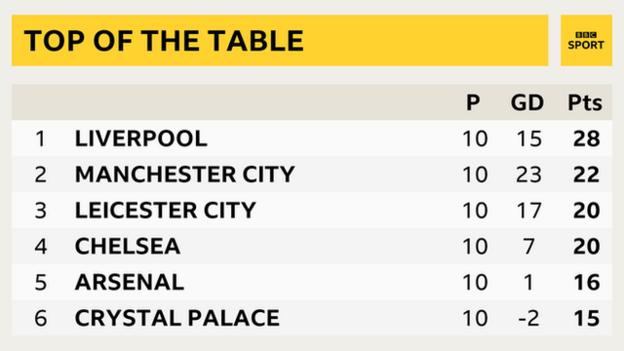 It's a huge victory for Liverpool, having dropped their first points of the season at Old Trafford against rivals Manchester United last weekend.

They went into this game having not lost at home in the Premier League since April 2017 and with only one defeat in their last 48 Premier League matches.

Second-placed Manchester City had cut their lead at the top of the table to three points following their 3-0 win over Aston Villa on Saturday.

The two teams go head-to-head next month at Anfield, when Liverpool will hope to make it 46 matches undefeated at home.

As for Spurs, they drop out of the top 10 with just three wins in their opening 10 games and sit 16 points behind the league leaders.

No Spurs revenge for European heartache

While Salah needed two minutes to score Liverpool's opener in last season's Champions League final, Kane did it in half the time at Anfield.

The Tottenham striker was first to react when Son's strike deflected off Dejan Lovren's head on to the crossbar.

Kane became only the third opposition player to score inside 60 seconds in a Premier League game at Anfield and his goal silenced the crowd, who sang 'we are the champions of Europe' at kick-off and held banners reminding their opponents of June's result in Madrid.

But Spurs were second best for the majority of the game, though Son presented a threat on the counter-attack and could have made it 2-0 when he rounded Lovren and Alisson, only to smash his effort against the crossbar again.

Tottenham are winless in their last nine away games against Liverpool in the league and have not won at Anfield since May 2011.

Liverpool manager Jurgen Klopp to BBC Match of the Day: "I really liked the way we played against really tough opponents. It was a wonderful game of football, it's how you wish games should be. The boys delivered. We had chance after chance and the keeper had sensational save after sensational save.

"At half-time I said this game had only one problem - the scoreline. When Tottenham had the ball their counter-attacks were incredible. We won the game and deserved it."

Tottenham boss Mauricio Pochettino to BBC Match of the Day: "We tried in the last 10 or 15 minutes and had chances but it was impossible! I've got no complaints about the penalty. You can have your own opinion. It was a fair reaction."

On Gazzaniga's performance: "He made some good saves but for sure he is so frustrated and disappointed because we lost."

Beating the top six - the best of the stats

Liverpool welcome Arsenal to Anfield on Wednesday in the fourth round of the Carabao Cup (19:30 GMT) and are back in Premier League action on Saturday, 2 November at Aston Villa (15:00).

Tottenham are away at Everton in the Premier League on Sunday, 3 November (16:30).