Celtic produced their biggest win at Pittodrie in 11 years as they swept Aberdeen aside in a ruthless Scottish Premiership victory.

Not since a 5-1 rout in February 2008 had Aberdeen lost so heavily to the Parkhead side on their own patch.

Neil Lennon's men were 4-0 up by half-time through goals from Odsonne Edouard, Jeremie Frimpong, James Forrest and Mohamed Elyounoussi.

And Aberdeen offered no fightback as Celtic strolled to the three points.

Following Celtic's win and Rangers' victory over Motherwell, Lennon's side remain top of the table on goal difference, three ahead of Rangers.

Aberdeen remain fifth and have won just four of their 13 home league games in 2019.

This season has been a testing one already for Aberdeen fans. Early European and League Cup exits, and league form which has them adrift of the summit was not in the pre-season script.

They needed a big performance and result to spark their season, and they got it against Motherwell the previous weekend. Now the question was could they follow that up with another one against a Celtic side who had little problem winning at home, but had dropped points away to Hibernian and Livingston in recent games.

Instead, Celtic were as devastating as they have ever been in the north-east.

After just 10 minutes, Edouard took Michael Devlin on a 20-yard run, played a one-two, and drifted into the box. As the defence stood off the Frenchman, he picked a spot and glided the ball into the bottom corner beyond goalkeeper Joe Lewis.

Then 18-year-old Frimpong raced from a right-back position to knock in Edouard's cross to make it 2-0 just moments later.

Aberdeen looked bewildered. Red shirts stood and watched as Celtic toyed with them, tapping the ball about in a series of one-touch passes before Forrest could have walked the ball into the net for the third.

By the time Elyounoussi got on the wrong side of Devlin to volley in a fourth just before the break, Dons fans had already started streaming for the exits.

Celtic had played Lazio three days earlier yet by the minute appeared to grow stronger. The pattern of the first half carried on long into the second half as Celtic continued to go forward.

If there was a criticism to be made of the visitors it was that they were wasteful. Frimpong and Tom Rogic shot over when they had time and space to pick their spot. Forrest tried to take on too many red shirts in the box when the opportunity to test the goalkeeper was there.

But it is still 10 goals in two league games for Celtic as the champions made yet another statement, and won on their Premiership travels for the first time in three games. 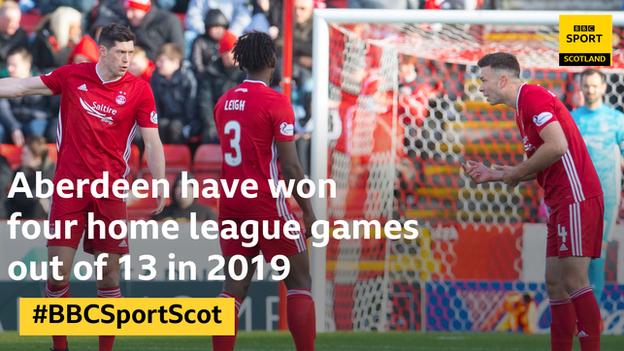 Man of the match - Jeremie Frimpong

There were so many contenders in green and white, but oddly enough the two main candidates were ostensibly defenders.

Kristoffer Ajer, however, spent most of his afternoon in the opposition's final third, marauding forward unchecked at every opportunity to add to Celtic's attacking threat.

As good as he was, the young full-back Frimpong edges it. His goal was just reward for his overall contribution, driving down the right to give Andrew Considine nightmares, but also doing any defending he had to do with a maturity that belied his teenage years.

The deadline-day signing from Manchester City looks an astute long-term investment but also, in the short-term, a valuable addition to Lennon's squad.