England defender Tyrone Mings says he could hear the racist abuse "as clear as day" but "everybody made the decision" to continue the Euro 2020 qualifier against Bulgaria in Sofia.

Play was halted twice in the first half because of abuse from supporters.

In line with Uefa protocol, England had the option to walk off the pitch but played the full 90 minutes and won 6-0.

"I am very proud of everyone for the decisions we made," Mings told BBC Radio 5 Live after his England debut.

Abuse, including Nazi salutes and monkey chanting, were aimed at Mings and his team-mates and the Aston Villa defender was shown on TV to turn towards the linesman and ask: "Did you hear that?"

Play was first stopped just before the half-hour mark when the referee came to the side of the pitch to speak to England manager Gareth Southgate.

After a stoppage of around five minutes, play continued until the 43rd minute when the game was halted for a second time.

Mings said: "I went to Harry Kane first. He spoke to the manager, who then spoke to the fourth officials. Everyone was aware of it but we ultimately let our football do the talking and didn't get distracted by anything.

"Just before the end of the first half the appropriate next step was to return to the changing room. We made a common-sense decision to play the remaining few minutes and decided at half-time.

"Everybody made the decision. The manager, the team, the supporting staff. We spoke about it at half-time and we dealt with it and escalated it in the right way.

"I am proud of how we dealt with it and took the appropriate steps. I could hear it as clear as day. It doesn't affect me too much. I feel more sorry for those people who feel they have to have those opinions.

"It was a great night for me personally. It was a really proud moment in my career. I hope everyone enjoys this moment and it isn't overshadowed."

This was the second Group A match in which England players had suffered racist abuse, having been subjected to similar in the 5-1 win over Montenegro in Podgorica in March.

Montenegro's punishment from Uefa was to have two home games played behind closed doors and a fine of 20,000 euros (£17,000).

Manager Southgate told BBC Radio 5 Live: "Nobody should have to experience what our players did. We followed the protocol. We gave two messages - one that our football did the talking and two, we stopped the game twice.

"That might not be enough for some people but we are in that impossible situation that we can't give everyone what they want.

"But we gave the players what they wanted and the staff what that they wanted. Remarkably, after what we have been through, our players walked off smiling and that is the most important thing for me.

"I have to give credit because the referee communicated with us all the time. You heard the stadium announcement on the first instance.

"In the second instance, we could have walked off but the players were very keen to finish the first half and talk it through. Not one player wanted to stop, they were absolutely firm on that.

"I explained to the players that if anything else did happen in the second half we would be coming off. We all saw the second half was calmer and that allowed our players to do their talking with the football."

A number of England players gave their reaction on social media, including striker Marcus Rashford, who scored the opening goal. The Manchester United player thanked the "brilliant support" and also praised Bulgaria captain Ivelin Popov for speaking to the fans at half-time.

"Not an easy situation to play in and not one which should be happening in 2019," said Rashford. "Proud we rose above it to take three points but this needs stamping out.

"Also been told what the Bulgaria captain did at half-time. To stand alone and do the right thing takes courage and acts like that shouldn't go unnoticed. #NoToRacism."

Manchester City forward Raheem Sterling, who scored twice, said "we did our job", adding: "Feeling sorry for Bulgaria to be represented by such idiots in their stadium."

Manchester United defender Harry Maguire called it "disgraceful behaviour" and said "there is no place in football for that", while club-team Jesse Lingard said it was "shameful" but the "England boys are stronger than those who chose to destroy the beautiful game." 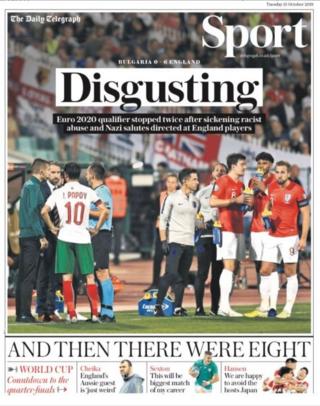