Eleven months ago, Motherwell manager Stephen Robinson knew something had to change.

Abject defeats at home to St Mirren and Kilmarnock last December left the Fir Park side only six points above the relegation play-off place, with just five wins from 20 games in the first half of the 2018-19 campaign painting a pretty bleak picture.

However, not even the most optimistic Motherwell fan would have envisaged the transformation that has followed since, with the Lanarkshire club sitting third in the Scottish Premiership.

But what is the secret to the success that has caused Robinson to be widely linked to the vacant Hearts job in the immediate aftermath of Craig Levein's departure? BBC Scotland takes a look.

The upturn in form since the start of 2019 has led Motherwell to third not just this season, but across the entire calendar year.

In the 29 league games that have been played in 2019, the Lanarkshire side have only been defeated nine times - four of which came against the Old Firm - picking up 16 wins and four draws in the process. An average of 1.79 points per game.

In contrast, in the same amount of games played from the start of 2018, Motherwell had won on just eight occasions.

Most notably, after 20 games last term Motherwell had only accumulated a total of 18 points in the league, whereas this season they have amassed 22 points in just 12 games. Robinson deserves huge credit for continuing the form into the new season following an 11-player turnaround over the summer. But how has he managed it? 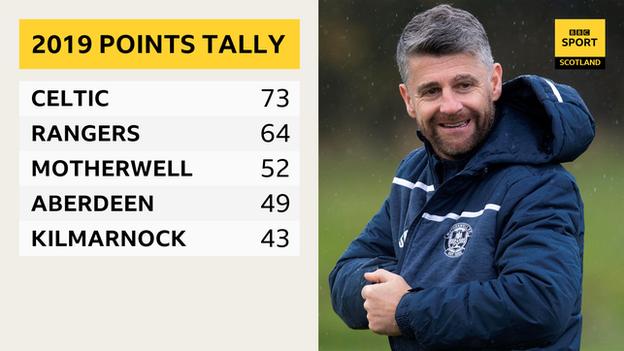 When Tom Aldred's loan expired at the end of last season, fans may have thought it would be difficult for a club with the financial resources of Motherwell to replace the Englishman.

The centre-back departed for Brisbane Roar in the summer after becoming an integral part of the Lanarkshire side's defence that reached the 2017/18 Scottish Cup final.

However, it could be argued that replacing the 29-year-old with Declan Gallagher has improved Robinson's side, with the ex-Livingston man gaining a Scotland call up while being at the heart of a defence that has picked up eight clean sheets in 12 games across all competitions. 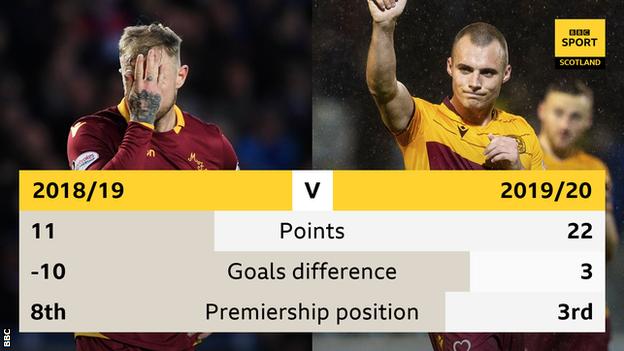 The same could also be said for the central midfield position.

As David Turnbull's transfer to Celtic concluded with the 20-year-old staying at Fir Park and being ruled out of action for the first half of this season through injury, there might have been concerns from Robinson about who could generate the creative spark from midfield.

Yet, the performances so far of summer signing Liam Polworth have offered signs of great encouragement.

The Inverness-born midfielder has started life in Lanarkshire with one goal and nine assists, with Robinson claiming his display against St Mirren last month was "one of the best performances he's seen at Fir Park for a long time".

Attacking additions Devante Cole, Jermaine Hylton, Christopher Long and Sherwin Seedorf have also made sound starts to their careers north of the border, as the four forwards have accumulated 14 goals between them in all competitions.

Where Motherwell are flourishing, their rivals are faltering. The Lanarkshire side are enjoying their highest scoring start to a season since the 2005-06 campaign, but goal-scoring duties seem to be shared equally across Fir Park.

Motherwell's top scorer is currently midfielder Liam Donnelly, with five goals to his name. However, he has played a part in 30% of his side's total goals scored in the league this season, as the Fir Park club have had eight different scorers across the 20 goals they have earned so far.

In contrast, Sam Cosgrove has scored seven of Aberdeen's 17 league goals this term, while netting 16 across all competitions. For Kilmarnock, seven players have scored on league duty but only Stephen O'Donnell and Gary Dicker have more than one strike, with two goals apiece each. 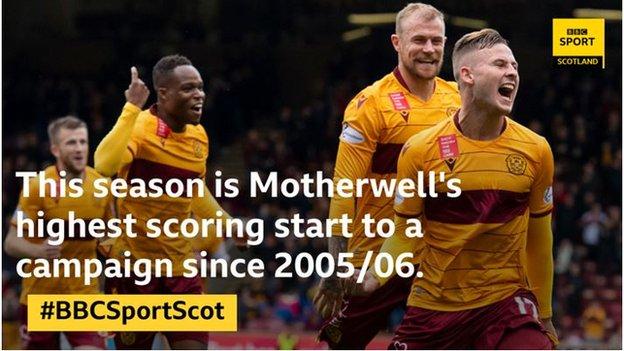 When I took the job, we were second bottom and encouraging players to come to Motherwell wasn't easy. You have to earn the right to do that and we did it with the style of play that wasn't quite as bad as people made out.

We were direct. Good managers play to their strengths and we got to two cup finals playing like that. It was very exciting, it was in your faces, we didn't fear anybody, there were limited mistakes because we simplified the game for them.

But I knew it couldn't last. When it starts to go wrong, people turn very quickly. I unfortunately got a five-game suspension and I watched us play against St Mirren and I thought we have to change this quickly. I knew we had to get to Christmas. I couldn't wave the magic wand and ask them to suddenly start passing the ball.

So we were patient and credit to the board, they gave me time and hopefully they have been rewarded as we played some good football at the end of the season.

We're still not there now. We sign boys who are not the finished article. We have to take boys from League Two and the Conference, boys who have maybe lost their way a little bit but have good attributes and are technically very good and maybe their attitudes have been questioned and we feel we can put an arm around them.

We work on them and work tirelessly at that. We try hard to make them better.