It is only the start of October, but Liverpool's eight-point lead at the top of the table already looks ominous for Manchester City.

Yes, City's injuries have hurt them - they have been nowhere near as solid as usual defensively, and they lacked a creative spark in Sunday's shock home defeat by Wolves too.

But, regardless of what their rivals are doing, to come out and win their first eight Premier League games of the season has been a fantastic response from the Reds after they went so close to winning the title last term.

There has been no hint of a hangover from that near miss.

Instead, Jurgen Klopp's side have thrown the gauntlet down to City, and now they are definitely the team to beat in the title race.

It is still far too early to write City's challenge off, but there are several reasons why it is going to be very hard for Pep Guardiola's team to catch Liverpool. 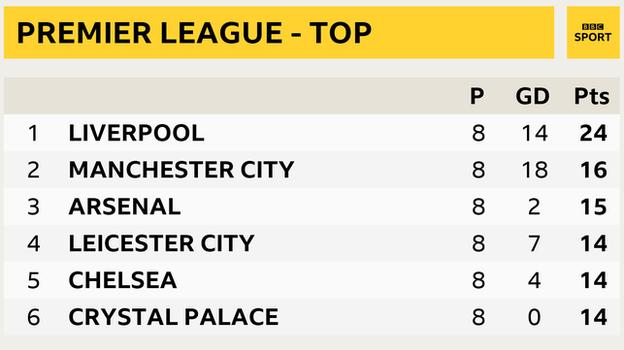 'Another off day Man City could not afford'

Nobody saw City's latest defeat coming - but it was no fluke, nor something they can blame on bad luck.

Much like when they lost at Norwich in September, Guardiola's side made lots of errors and looked really poor defensively - Wolves missed three one-on-one chances against keeper Ederson in the first half when the score was 0-0.

Without the injured Aymeric Laporte at the back, City have clearly got a big problem - and it is not going away.

The strength of their attack means the defence is not always tested but, on Sunday, they lacked ideas going forward too.

Wolves deserve a lot of credit for that, because they were set up perfectly to soak up pressure. They left no space behind their backline and forced City to come inside or hit crosses into the box where their three centre-halves were waiting to clear.

I usually associate City with quick and slick passing in and around the opposition's 18-yard box, but there was not a lot of that on display on Sunday.

The absence of Kevin de Bruyne, who has created so much for them this season, cannot have helped.

Without him, City could not find a way through, or around, the Wolves defence - before Adama Traore's breakaway goals won it late on.

'Reds give themselves a cushion at the top'

What made things worse for City this weekend was that Liverpool kept on winning while they dropped more points - Saturday's 2-1 victory over Leicester was the Reds 17th in a row in the league, a run stretching back to 10 March.

By maintaining their level from last season, Liverpool have said "we are still here" to the defending champions, and to everyone else too.

They fell just short last season, which will still be hurting them now. They might not go away this time.

Liverpool only lost one league game in 2018-19, so we know how hard they are to beat.

They have shown that same resolve to win games in the past few weeks when they have not been at their best.

Like City, they have had to deal with losing a key player to injury too.

It was a big blow when Brazil goalkeeper Alisson tore his calf muscle in the opening Premier League game of the season but they have still taken maximum points without him.

The Reds have been here before, of course, and they did not exactly thrive when they were frontrunners last season.

That experience will help them. But the real difference now is that, for the first time, they have a proper cushion at the top.

Last season, the biggest lead they had over City when both sides had played the same number of games was seven points, and even that only lasted for four days at the turn of the year.

From then on, they were under almost constant pressure in one of the tightest title races I can remember - but with the way the table looks now, the Liverpool players won't be feeling the same way.

Of course, they still have to handle being top, but they go into the international break with the biggest lead any Premier League team have had after eight games, and they fully deserve it.

'Longstaff winner is what dreams are made of'

Klopp's next test is a trip to fierce rivals Manchester United on 20 October, which is usually one of Liverpool's toughest away matches of the season.

This time, Liverpool will not have any fears of going to Old Trafford, not just because of how well they are playing, but because of how badly United are struggling. They still look a million miles away from matching the Anfield side in every department.

The defeat at Newcastle on Sunday was another example of that, but it also provided me with my favourite moment of an eventful weekend in the Premier League.

Matty Longstaff made his Newcastle debut alongside his older brother Sean in midfield, was voted man of the match and scored the winning goal at St James' Park.

I was off my feet in the Match of the Day 2 production office when his shot flew in, and it is what dreams are made of. Every kid who grows up in Newcastle wants to do exactly the same.

It was a brilliant moment for both brothers and their family watching in the stands. Matty will remember it for the rest of his life.