The Spurs players are starting to believe manager Pochettino will soon leave the club, with Manchester United his preferred destination. (Sun on Sunday)

West Ham are set to put a £100m price tag on England midfielder Declan Rice in order to price Manchester United out of a move for the 20-year-old. (Sunday Express)

Barcelona are set to revive their interest in Chelsea winger Willian, 31. The Brazil international's contract expires at the of the season. (Mundo Deportivo - in Spanish)

Manager Pep Guardiola says Manchester City will not buy any players in January because they do not have the money. (Sky Sports)

Manchester City have given Dutch coach Giovanni van ­Bronckhorst an inside role at the club as they prepare for life without Guardiola. (Sunday Mirror)

What happened in the Premier League on Saturday?

The agent of Manchester United defender Victor Lindelof, 25, says the Sweden international was wanted by Barcelona over the summer. (Sport Bladet via Manchester Evening News)

Manchester United will demand £20m for England Under-21 goalkeeper Dean Henderson, 22, who is on loan at Sheffield United, at the end of the season. (Sun on Sunday)

Barcelona are unhappy with midfielder Arthur, 23, after he enjoyed a night out with Paris St-Germain forward and fellow Brazilian Neymar. (Marca)

Juventus manager Maurizio Sarri is keen to reintegrate former Liverpool midfielder Emre Can, 25, back into his team after the German's failed summer move to PSG. (Le10sport - in French)

West Ham are in talks to sign 16-year-old Manchester United academy forward Mipo Odubeko. Juventus, Borussia Dortmund and ​Bayern Munich are among the other clubs believed to be interested in the Republic of Ireland Under-17 international. (90min)

Former Japan forward Keisuke Honda, 33, has asked Manchester United to make him an offer. Honda has been a free agent since leaving Melbourne Victory in the summer. (Metro)

Video assistant referees should only intervene on "clear" offside decisions, according to Uefa's referee chief, which is in contrast to how the system is being used in the Premier League this season. (Mail on Sunday)

Ajax hope to agree an improved contract with Real Madrid target Donny van de Beek in an attempt to fend off interest in the 22-year-old Netherlands midfielder. (Voetbal International - in Dutch) 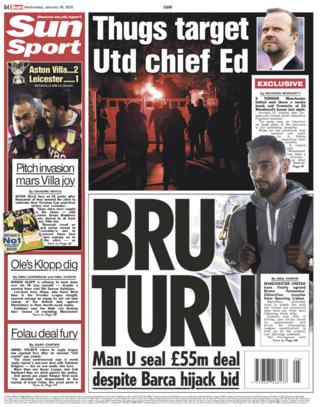