Hibernian boss Paul Heckingbottom was sent to the stand as his side held champions Celtic to a Scottish Premiership draw at Easter Road.

The Englishman kicked a water bottle after Ryan Christie levelled for the visitors, hitting an assistant referee.

Celtic pressed heavily for a winner, but fell short in front of goal.

Hibs' point helps relieve some of the pressure on manager Heckingbottom, whose side had lost four of their previous five league games.

For Celtic, it brings to an end their 100% start to the domestic season.

When referee Kevin Clancy blew the opening whistle just after 12.30, there was something of a sedate atmosphere inside Easter Road. However, that was not to last for too long.

After just eight minutes the home fans erupted as their team took an early advantage. Wonderful play from centre-half Adam Jackson and midfield general Scott Allan set up Doidge in space in the right-hand side of the visitors box.

The striker had few options, but his cross into the danger area deflected off the ankle of Ajer and wrong-footed keeper Fraser Forster who had no chance.

Tackles were flying in all over the pitch and Clancy was having a fair job keeping his eyes on the game. The man in the middle then became the focal point of the home fans, players and management when Neil Lennon's side drew level in controversial circumstances.

James Forrest went to ground close to the half-way line under a challenge from Tom James. Referee Clancy initially looked to have seen the incident and allowed play to continue, only for fourth official Nick Walsh telling the official otherwise.

As the Hibs players stood expecting the ball to be played back to them, Celtic broke forward and duly equalised when Christie nodded home a Moritz Bauer cross.

Hibs boss Heckingbottom was outraged and even more so when shown a red card for kicking a water bottle that hit assistant referee Alan Mulvaney on the leg.

Tempers were running high and Olivier Ntcham can count himself fortunate to only receive a yellow for throwing an arm out at Josh Vela who was also booked for his part in the initial challenge.

Odsonne Edouard flashed a header just over and his replacement Vakoun Bayo should have at least found the target when creating space for himself just 12 yards from goal.

The huge Celtic support though must have known it was not to be their day when two strong claims for penalties were turned down. Ryan Christie was clipped by Lewis Stevenson but Clancy's decision was a corner and Bauer also appeared to be tripped inside the area but again no penalty awarded. 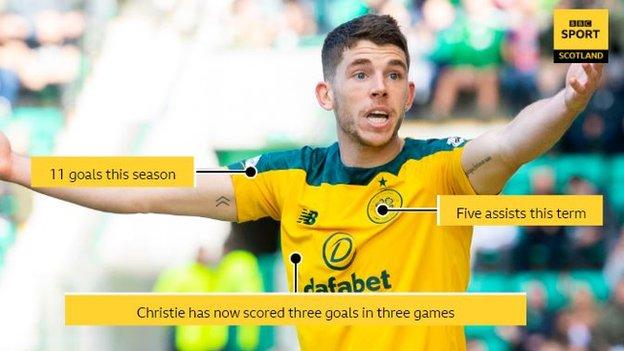 Man of the match - Scott Allan

For the visitors, Christie and Scott Brown put in their usual powerful 90 minutes shift but the man of the match award must go to a home player.

After what has been weeks of criticism aimed at the Hibs players, they showed they were no "soft touches" as their manager had claimed previously.

Paul Hanlon turned in one of his best performances of this campaign while Stevie Mallan again showed he is not just a player who likes a shot at goal.

But the award goes to a man shunned by Celtic and shown the door in the summer.

Scott Allan was a joy to watch and his incisive passing at times carved open the Celtic defence.

It is a mystery as to why he failed to make an impact at Celtic Park but on this form he will be a real force to reckon with.