"If his injury is as bad as it looks, it shifts the title towards Anfield. It is that big."

That was BBC pundit Jermaine Jenas's reaction on Match of the Day, a few hours after seeing Manchester City defender Aymeric Laporte carried off on a stretcher during their win over Brighton on 31 August.

When the extent of Laporte's knee injury was assessed over the international break, the news was not good for the Frenchman, or City.

While the 25-year-old left-sided centre-back avoided the fate of team-mate Leroy Sane, who is sidelined until March after damaging his anterior cruciate ligament during the Community Shield, he is still not expected to return to action until the start of 2020, at the earliest.

If that prognosis is correct, Laporte will miss at least 15 Premier League games, City's entire Champions League group campaign and the start of their Carabao Cup defence.

It adds up to about a third of City's season, so we are about to find out just how important he is - especially because City's two remaining senior centre-backs have played together a lot less than you might think.

Since he joined City from Athletic Bilbao for £57m at the start of 2018, it has largely been 'Laporte and one other' at the centre of City's defence, although he has occasionally moved over to cover at left-back.

"Laporte is their gladiator at the back - City's leader and number one defender," said BBC pundit Chris Sutton. "So it is going to be interesting to see how they cope without their main man.

"He is for City what Virgil van Dijk is for Liverpool. Of course it is important that he can bring the ball out so well, but his main job is defending. He makes City more solid, and he gives them stability right through the team.

"Pep called Laporte the best left-sided centre-back in Europe last month for a reason. Losing him affects the dynamic of the whole back four, and he will be a massive part missing from their team."

Does Pep trust a Stones-Otamendi partnership?

With John Stones also on his way back from injury, and no replacement signed since Vincent Kompany left in the summer, Guardiola currently has only one fully fit senior centre-back - Nicolas Otamendi.

In the short-term at least, City can use Fernandinho to plug the gap.

The 34-year-old Brazilian holding-midfielder was training as a centre-back even before Laporte got injured, came off the bench to replace him in that position against Brighton, and could step in again at Norwich on Saturday.

Once Stones is fully fit, he and Otamendi can - in theory at least - form a more orthodox pairing.

They have played together plenty of times before in the past, including in this season's Community Shield, so familiarity will not be a problem, but they do not appear to be a partnership that Pep particularly trusts.

Since the left-footed Laporte joined in January 2018, Stones and Otamendi have started together as centre-backs in a four-man defence only three times in 56 Premier League games, and in none of the 14 Champions League ties City have played in that time.

Last season, they partnered each other in three FA Cup ties - in the third, fourth and fifth rounds against Rotherham, Burnley and Newport County - and against Everton and Bournemouth in the League.

The only other competitive game they have started together as a central-defensive pair in the past 20 months was against Huddersfield at the end of the 2017-18 season, making a total of six games out of a possible 80 in all competitions (not including the Community Shield).

"He clearly does not have much faith in playing them together, which must be a worry for the next few weeks," said Sutton.

"That statistic is a surprising one," added Danny Murphy. "It could be that the manager thinks they don't work that well as a combination, or that neither of them particularly likes playing on the left side."

Getting the balance right - and time for Stones to step up?

Otamendi, who is right-footed, usually moves from the right side to the left when Laporte is not available - he did exactly that during the Brighton game - while Stones - another right-footer - has not played on the left side with any partner since the early weeks of his City career.

"Most centre-halves I played with during my career got used to playing on one side in a four, and there were also times when the manager would convince himself that a defender was not as effective on the other side," Murphy explained.

"At Liverpool, Sami Hypia would always be on the left, with Jamie Carragher on the right. With Fulham, it was always Brede Hangeland left and Aaron Hughes on the right.

"And if one of them wasn't fit, then the manager would always be looking at the balance of the centre-halves, rather than just pure ability, when he picked a replacement - I remember that Chris Smalling never did as well on the left when he came into that Fulham team as he did on the right.

"With the quality that Stones and Otamendi both have, I don't think they should be uncomfortable on the left, but you have to remember Pep watches them in training every day. He will have an idea in his mind about which of his centre-halves complement each other, and the rest of the team.

"The other thing that could have been a factor in not picking them together is the number of mistakes they both make. They are both good ball players, but they both have more errors in them than Kompany or Laporte, which might be why Pep prefers to only play one of them."

Stones in particular has come under fire for his mistakes, and he was left out for much of the run-in to last season's title success.

"I think Stones has got a bit to prove to Pep anyway, and not just in this partnership," added Sutton. "This is a big opportunity for him to do that.

"Some of his defending has been questionable over the past couple of years and, last season, in the big games he was being left out. Laporte's absence means he is really going to have to step up."

How well can Fernandinho fill in?

While we must wait and see whether Stones can win Guardiola over, it seems the City boss already has faith in Fernandinho as a centre-back.

"He is a holding midfielder and everyone knows that, me included," Guardiola said after the Brighton game.

"But I think he has the conditions to play at centre-back. He is intelligent, fast, strong, he can head the ball and he can see what is happening in front of him."

Murphy agrees, explaining: "As long as Rodri stays fit and can play that holding role, then Fernandinho playing centre-half is not really weakening City that much.

"He is everything Pep says, plus he is super-experienced and really good on the ball. The way City play, he will have inter-changed with the centre-halves all the time anyway when he is in his usual position.

"But the most important thing for me is that he is a natural defender. He likes doing it and I don't see this as a case of asking someone to be in a position when he doesn't really want to be there. That's when you get problems.

"As long as you have got the right physical attributes and the skill, which Fernandinho does, then really it is just a mindset change. He is probably quite excited about it, because it is something new and different, and it is also far less demanding on your body to play centre-half than centre midfield.

"He is not the only other option, though, because Kyle Walker has played at centre-half for England. I know that was in a three, not a four, but Kyle is an experienced defender, who is strong and quick and good on the ball - I would consider using him too."

'City defence needs to be ready for Liverpool'

If there is anything positive about Laporte's injury, it is the timing.

City do not face any significant obstacles in their Champions League group of Shakhtar Donetsk, Dinamo Zagreb and Atalanta, and their immediate domestic fixture list also appears relatively kind.

The defending champions don't play another side from last season's top six until they face title rivals Liverpool at Anfield on 9 November, giving their Laporte-less defence plenty of time to bed in. They will have to be ready for Klopp's side however.

"Both teams are absolutely relentless and if you look at the way they ended last season and have started this one, you can see that those head-to-heads are going to be absolutely crucial," said Sutton.

"It is the small details that may well decide the title this season - there was only a point between Liverpool and City last time out, and it looks like it is going to be just as close this time. 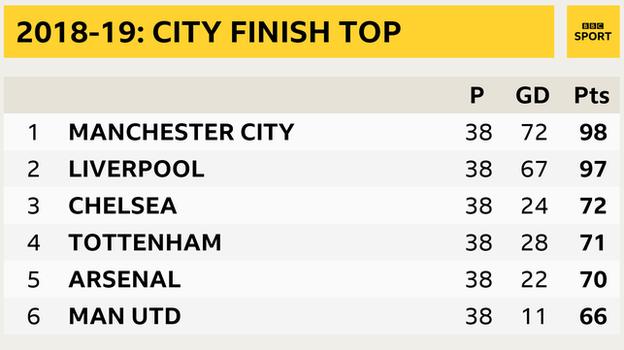 "They must be sitting there looking at each other and searching for small things that they can take advantage of. This is one of them. Nobody wants injuries to decide things, but of course they will play a part.

"If City do keep having to use a makeshift centre-half, even a good one like Fernandinho, it could ultimately be the difference between them winning the title, or Liverpool.

"In that situation, things like defending set-pieces might become more problematic. City already have something of a weakness there, even with Laporte in the team. Without him, I am sure most Premier League managers will think there is an opportunity to target them aerially. It might only cost City one goal, but that might be enough.

"They can get away with it over the next few weeks because they are such a good side, but when the big games like Liverpool come along it will be different.

"That is when it will be more of an issue and, for me, that is when Stones has to come to the party."