Rangers paid the perfect tribute to late captain Fernando Ricksen by edging Feyenoord in a rousing Europa League win at an emotional Ibrox.

There was a minute's silence pre-match and applause in the second minute in tribute to Ricksen, who died on Wednesday after losing his battle with motor neurone disease.

The Portuguese side beat Young Boys 2-1 at home, with Steven Gerrard's side travelling to Switzerland in their next match.

Feyenoord, meanwhile, will host Porto next, having grown into the game at Ibrox late on but failing to land a decisive blow as Allan McGregor made several good saves to keep them out.

So often professional sport is about blocking out emotion. It's about maintaining control, concentration, and a clear mind to carry out the game plan. With the death of Ricksen at the age of just 43 on Wednesday after a heart-breaking six-year fight with motor-neurone disease, there was no escaping emotion at Ibrox.

The sea of scarves outside the ground, the touching tributes from former team-mates, the minute's silence and banner before kick-off, the applause during the second minute which spread from the stands to the players on the pitch, it was emotional. Gerrard urged his players to tap into that raw sentiment and, after a shaky start, they duly obliged.

There was an intensity to Rangers as they pressed Feyenoord into giving the ball away and crisply set about constructing their own attacks. Ojo's thumping strike was a thing of beauty, but it was the build-up that was perhaps more telling of Rangers' performance.

The impressive Steven Davis burst a lung to close down Orkun Kocku, whose heavy touch in-field left the ball up for grabs. Glen Kamara beat his man to the ball, then Borna Barisic also snapped into a challenge and it broke to Ojo who smashed home to send the stadium into bedlam, and consign Tavernier's earlier penalty miss, awarded for a handball, to a distant memory.

Rangers weren't nearly done either. Scott Arfield cracked the bar, the bustling Morelos had two tries at beating Kenneth Vermeer in the visitors' goal and then claimed for a penalty as he went for a third effort. Replays though, showed Edgar Ié got a touch on the ball. Goldson also had a couple of headers just over, then Ojo thought he'd doubled his tally only for his shot to be desperately cleared off the line.

Feyenoord were rattled, the half-time whistle a mercy.

The Dutch champions of 2017 almost stole an equaliser straight after the break as the ball ricocheted off Goldson from Eric Botteghin's diving header and spun just wide, but largely their distribution from the back was hapless for the most part because of Rangers' intense closing down.

But when Feyenoord did manage to play through the press, they showed glimpses which suggested Rangers might need a second, for example when McGregor had to get down smartly to push Dutch international Steven Berghuis' shot wide.

Ojo should have got the second as he headed over from point-blank range and Ryan Jack, Davis, Arfield and Morelos all had chances to put the game to bed. With each miss, Feyenoord grew in confidence and themselves had opportunities, the Ibrox crowd growing frustrated at the inability of their team to keep the ball.

Ultimately, it didn't matter. McGregor denied Luciano Narsingh and Jens Toornstra superbly to ensure a winning start for his team.

It was emotional, the old stadium rocking by the end. But in the cold hard analysis, a home win provides the perfect start in the quest for the knockout stages.

Man of the match - Scott Arfield

The wide midfielder helped lead Rangers' press which caused Feyenoord all sorts of issues. He, Davis, Morelos and Ojo all played their part in hounding the opposition and his energy epitomised their intensity.

The Canada international's clever movement inside the full-backs and his link play were also vital, and he was unlucky not to score as he drifted into space to hit a shot which came crashing back off the cross-bar. Substituted with two minutes to go, he could barely run by the end which summed up his commitment. 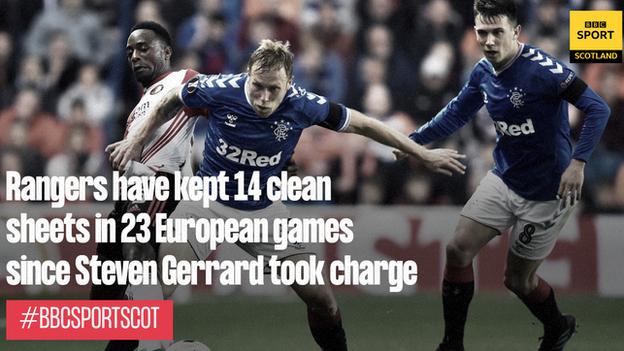