M'Baye Niang fired the hosts in front from the spot after Kristoffer Ajer's lunge brought him down in the box.

But James Forrest won Celtic the penalty for Christie to convert.

That set up a tense finish, and substitute Vakoun Bayo was dismissed in stoppage time after picking up a second booking.

Forrest drew the foul from Rennes captain Damien da Silva in what looked a soft award, though Celtic had a clear shout for a penalty turned down moments earlier when Christie was tripped.

With CFR Cluj shocking Lazio 2-1 in the other Group E match to top the section, it leaves Celtic level with their hosts as they welcome the Romanian champions back to Celtic Park in two weeks' time.

It is all about small margins in European football. Margins, and mistakes.

Had Mohamed Elyounoussi been a couple of inches further forward in a first half which ebbed and flowed nicely, he would have tapped Boli Bolingoli's beautiful cross into an empty net.

Had Celtic's Norwegian defender Ajer not been so determined to go to ground on Niang rather than stay on his feet, Rennes would not have won a first-half penalty, expertly despatched by the Senegalese striker himself into the corner of the goal vacated by the diving Fraser Forster.

The wall of noise that greeted the goal inside a raucous Roazhon Park was the aural equivalent of a mighty slap in the face for a Celtic side who had settled into the game well. That said, they did not overly test home goalkeeper Edouard Mendy, whereas Forster had to be lively to repel a powerful Raphinha shot and was mightily relieved to watch midfielder Clement Grenier head over and wide.

But there could not have been many inside the stadium who would have complained if Celtic had gone in level at the break.

The Scottish champions would have to be clinical. But when a chance came the way of captain Scott Brown from a free-kick early in the second half, he headed over.

And after conceding a penalty, Celtic might legitimately ask why they were not awarded one within five minutes of the restart when Christie appeared to be tripped just inside the area. Margins once again, and possibly a mistake from the match officials.

They did not have to wait long to claim for another one. Lovely trickery and footwork by Forrest bamboozled Da Silva, whose furious protests that he had not touched the turf-bound Scotland winger were dismissed by referee Jose Maria Sanchez Martinez. The penalty was superbly converted by the left foot of Christie to re-establish parity for Neil Lennon's side before the hour.

A brilliant free-kick from Grenier looked to be beating Forster at his near post as both sides probed. But it went just by the post, possibly aided by some goalkeeping fingertips, although a goal-kick was the ultimate result.

There was late drama, too. A pair of yellow cards in quick succession for Celtic's substitute Bayo, the second for what television pictures showed as minimal contact on Rennes goalkeeper Mendy, meant the visitors had to play three minutes of injury time with 10 men, with the home crowd venting their disapproval. There was nearly a late winner for Christie but a shot with the outside of that left boot was deflected away for a corner.

However, Celtic emerge from Rennes with a 1-1 draw, as they did under Lennon eight years ago. He said that result gave him a platform to build upon in Europe, and he'll be hoping history is once again repeating itself. 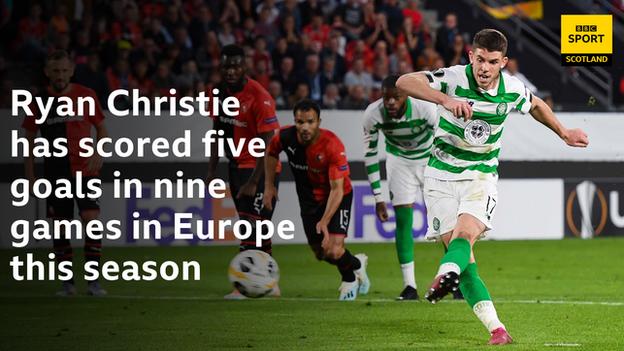 Man of the match - Ryan Christie

For a skilful, forward-thinking display full of energy and creativity, and for a coolly-taken penalty to make sure Celtic did not leave with nothing, the award goes to Christie, although he was ably assisted by some good performances around him.

The 24-year-old was up against a high-quality Rennes midfield, with Grenier and Benjamin Bourigeaud catching the eye, and the Scot was quite happy to do his shift when it came to any defensive duties. Penalties bring pressure but Christie looked like he didn't have a care in the world as he made sure Celtic got off the mark straight away in Group E with a good point away from home.