A group of Inter Milan fans claim Cagliari supporters were showing Romelu Lukaku a form of "respect" when they aimed monkey chants at him on Sunday.

Lukaku, who moved from Manchester United to Inter in the summer, was subjected to the racist abuse after scoring the winner in a 2-1 victory.

A statement from Inter fan group Curva Nord said "Italian fans are not racist" and the abuse was gamesmanship.

It added: "We are sorry you thought what happened in Cagliari was racist."

The open letter to the Belgian forward, published on the fans' Facebook page, also said: "You have to understand that Italy is not like many other north European countries where racism is a real problem.

"We understand that it could have seemed racist to you but it is not like that. In Italy we use some 'ways' only to 'help our teams' and to try to make our opponents nervous, not for racism but to mess them up.

"Please consider this attitude of Italian fans as a form of respect for the fact they are afraid of you for the goals you might score against their teams and not because they hate you or they are racist."

Lukaku, who said the game is "going backwards" in the wake of the abuse, stood and stared at fans behind the goal - where the chants had originated from - after scoring the winning goal.

Inter defender Milan Skriniar was seen putting his fingers to his lips to the Cagliari fans in support of his team-mate - condemned the fans' actions in a post-match interview.

The abuse received by Lukaku was the latest incident in which a black player has been racially abused on the pitch by Cagliari fans.

In a statement, Cagliari said it intends to "identify, isolate and ban those ignorant individuals whose shameful actions and behaviours are completely against those values that Cagliari Calcio strongly promotes in all their initiatives". 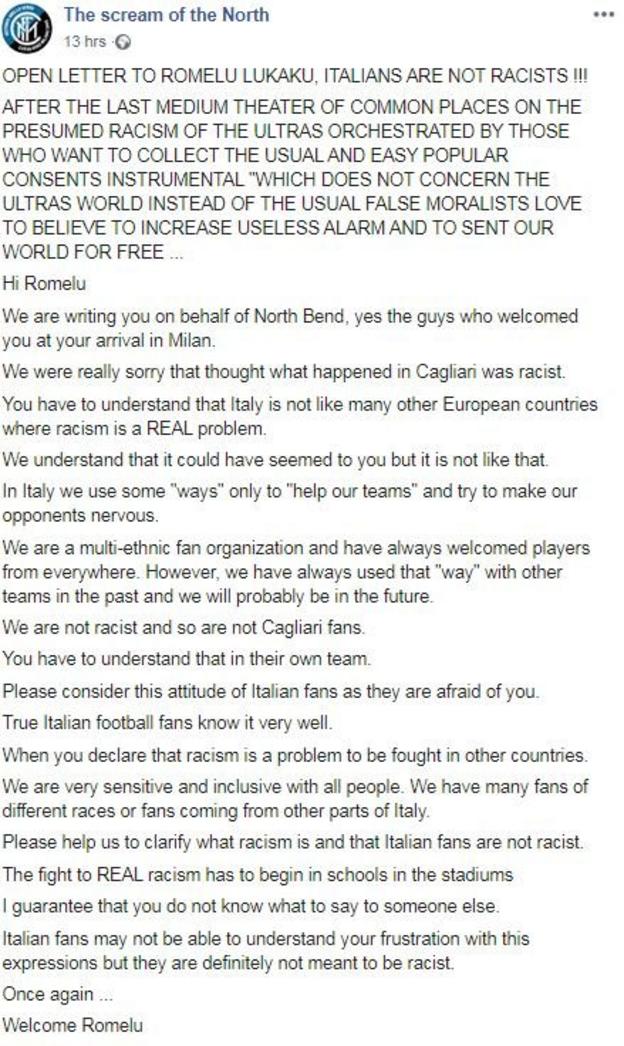 Serie A decided not to sanction Cagliari for their fans' racism - despite admitting their actions were "reprehensible".

The previous year Cagliari fans were called out after abusing another Juventus player, Blaise Matuidi - but Italian football chiefs did not take any action.

In 2017, Pescara midfielder Sulley Muntari walked off the pitch after being racially abused by Cagliari fans - but was subsequently banned by football authorities for his protest.

Lukaku's former United team-mates Pogba and Rashford were both targeted on social media after penalty misses this season.

Chelsea defender Kurt Zouma was racially abused on Saturday after an own goal against Sheffield United, while team-mate Abraham and Reading's Yakou Meite both received racist messages online after missing penalties last month.

Last month, Twitter said it would meet clubs and campaigning organisations to show the "proactive work" being done to tackle abuse.

The club underlines - once again - its intention to identify, isolate and ban those ignorant individuals whose shameful actions and behaviours are completely against those values that Cagliari Calcio strongly promotes in all their initiatives. Every single day.

Cagliari v Inter Milan was the right occasion to appreciate and enjoy positive cheer, never addressed against anybody: in fact inside our "Curva Futura" - the first dedicated sector in Italy built to host children - both Inter Milan and Cagliari supporters enjoyed a lovely evening together in the name of their passion for football.

Cagliari Calcio does not want to underplay what occurred last night, endorses the respectable moral values of its people from all the stadium sections, but firmly rejects the outrageous charge and silly stereotypes addressed to Cagliari supporters and the Sardinian people, which are absolutely unacceptable.

Full solidarity to Romelu Lukaku and even stronger commitment toward annihilating one of the worst plagues that affects football and our world in general.

However, as we are aware that technology is not enough, we believe our commitment needs a real support by the rest of the football stakeholders: starting from all the true supporters, to all the stewards in the stands, from police and security agents, passing to media and as well through Lega Serie A and FIGC. Cagliari Calcio is asking you all a solid help to win a battle that involves everyone.

Former Newcastle striker Demba Ba, in reaction to the statement from the Inter fans' group, said black players should leave the Italian league.

He tweeted: "And here's the reason [the statement from the group] why I decided not to play there when I could.

"Surely it [players leaving] won't stop their stupidity and hate but at least they won't affect other races."

Liverpool striker Rhian Brewster, who claimed he was racially abused during a Uefa Youth League game in 2017, tweeted on Tuesday: "Everyday another case, so embarrassing to see another unaggravated example of racial abuse, stay strong Romelu Lukaku. We'll win the fight one day."