Arsenal and Spurs played out a thrilling 2-2 draw to finish off an exciting weekend of football.

Liverpool kept up their 100% start with a 3-0 win at Burnley, while title rivals Manchester City thrashed Brighton 4-0.

Chelsea were held 2-2 by Sheffield United, with Manchester United drawing 1-1 at Southampton.

Leicester impressed again with a 3-1 win over Bournemouth, West Ham beat Norwich 2-0, Crystal Palace saw off Aston Villa 1-0 and Newcastle drew 1-1 with Watford. In Sunday's other game Everton beat Wolves in a 3-2 thriller. 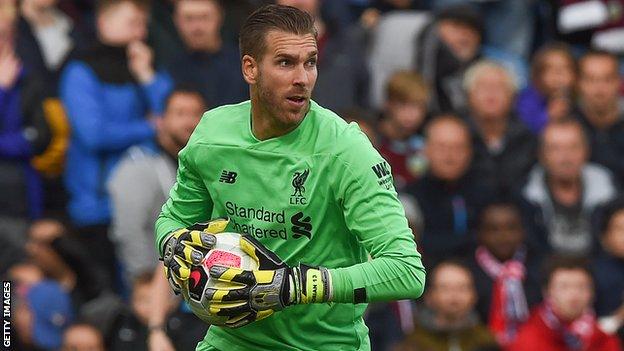 I think it's perfectly acceptable for a goalkeeper to rely on his defensive unit just as much as his defenders can rely on him. The relationship between the Liverpool back four and stand-in keeper Adrian has had its good and bad moments.

Adrian's performance against Burnley, however, was about as good as it gets. The Spanish keeper made a superb save from Chris Wood at a critical time in the first half, while his defensive unit made sure Adrian was not required to come to their rescue thereafter. For the first time since Adrian took over from the injured Alisson Liverpool looked comfortable with their goalkeeper. The future is beginning to look Red.

Did you know? Adrian has a 73% save percentage in the Premier League this season. Of goalkeepers with three or more starts in 2019-20, only three have a better percentage (Vicente Guaita 80%, Ederson 77% and Hugo Lloris 76%). 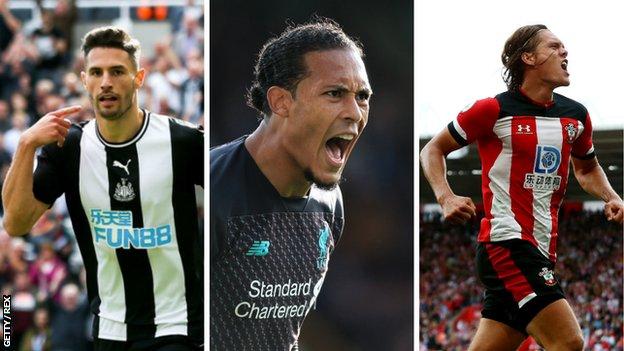 Fabian Schar: This was a very different test to the one facing Newcastle last week against Spurs. I posed the question 'could the Magpies attack with the same conviction as they defended at White Hart Lane?' Well, the performance wasn't quite as convincing but good enough to contain a Watford side desperate for points.

Schar played a major part in this controlled, professional performance by Newcastle. They didn't panic when they went 1-0 down and he took his goal with great composure. Not bad for a centre-back.

Did you know? Since the start of 2019, Schar has scored five Premier League goals, more than any other current Newcastle player. Four of these have come at St James' Park.

Virgil van Dijk: It was only a matter of time before Virgil van Dijk resumed his place in my team of the week. This week the Dutchman has been indulging himself at award ceremonies with Lionel Messi and Cristiano Ronaldo. I suppose if you are going to be among the best players in the world these events must be attended.

However it was nice to see him exchange his tuxedo for the familiar away colours of Liverpool Football Club against Burnley and turn in a stellar performance. For Van Dijk, this game was a stroll in the park. Good to have you back in my team of the week, Virgil.

Did you know? Liverpool have won 73% of their Premier League games when Virgil van Dijk has featured, with the Reds suffering only four defeats in these 56 games (W41 D11 L4).

Jannik Vestergaard: When Jannik Vestergaard out-jumped Victor Lindelof to nod home a brilliant headed equaliser against Manchester United, my immediate thought was he wouldn't have done that to Chris Smalling.

The former United centre-back, on loan at Roma, finds himself surplus to requirements - along with Romelu Lukaku and Alexis Sanchez - only for United's manager Ole Gunnar Solskjaer to then have the nerve to say his squad is looking a bit thin. The Red Devils are looking anything other than devilish at the moment. In fact they looked insipid and unconvincing against a 10-man Southampton side who should have been put away.

Did you know? Vestergaard scored his first Premier League goal for Southampton in his 27th league appearance for the club, becoming the third Danish player to score for the Saints in the Premier League, after Ronnie Ekelund and Pierre-Emile Hojbjerg. 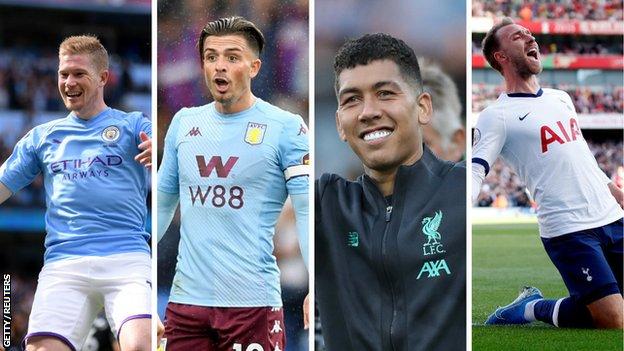 Kevin de Bruyne: He scored the first goal and set up the second in a first-half performance that just oozed class. The Belgium international has now contributed five assists in four games and at this rate could find himself in the late teens and even reaching 20 in an injury-free season. This would spell disaster for Liverpool of course. Just a thought!

Did you know? De Bruyne has been involved in nine goals in his past seven Premier League starts (two goals, seven assists).

Jack Grealish: I don't normally select players on the losing side but on this occasion I must make an exception. Jack Grealish not only gave a captain's performance against Crystal Palace but was robbed of the part he played in providing Villa with what would have been an impressive and justified equaliser.

Kevin Friend's shocking decision to disallow Henri Lansbury's 96th-minute goal after Grealish's brilliant run ranks among the worst decisions I've seen in years. What Friend didn't see (and I did) was Grealish get bumped by Wilfried Zaha as he entered the box, which propelled Grealish to the ground. You actually see Zaha, with hand raised, appeal to the referee to say no penalty. This was truly an outrageous decision.

Did you know? Grealish has created the most chances of any Aston Villa player in the Premier League this season (eight), with all but one of those coming from open play.

Roberto Firmino: I've said it before and I'll say it again, when Roberto Firmino is on song so are Liverpool. The Brazilian orchestrated a masterclass by the Merseysiders against a Burnley side who, but for one brief occasion, never looked in the match.

Perhaps Firmino can heal the obvious rift between Mohamed Salah and Sadio Mane because it would appear manager Jurgen Klopp is having difficulty. For Mane to explode so publicly, as he did at being substituted after Salah had so clearly ignored him on two occasions when in scoring positions, was completely justified. Salah can't play this game on his own - a point Firmino clearly understands.

Did you know? Firmino became the first Brazilian to score 50 Premier League goals. He is the ninth player to reach the milestone for Liverpool - no other club has had more (level with Manchester United).

Christian Eriksen: When I saw Eriksen was starting this north London derby I immediately thought, Spurs can't lose this game. I was right, they didn't lose the game - but they should have won it. Eriksen is a class act and when he is on his game there are few better.

It was the Dane who bust a gut to get up with the play and tap home the loose rebound from the Erik Lamela shot. Spurs look like they might hang on to Eriksen for a little while longer, which is just as well because they have no-one who can handle the ball better. As for Arsenal, it's a good job they have Matteo Guendouzi. He's a Granit Xhaka with brains.

Did you know? Eriksen has now scored 50 Premier League goals - the first Danish player to reach this landmark. He is the first player to register both 50+ goals and assists for Spurs in the competition. 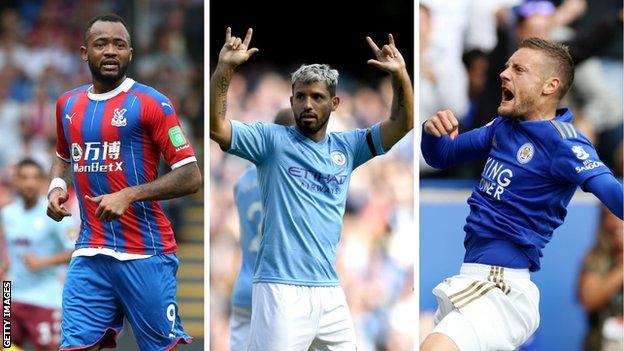 Jordan Ayew: This game wasn't a classic by any means but it did produce talking points. Jordan Ayew was very unlucky not to make my team of the week after his performance against Manchester United. However there is no doubt about his selection this week after forcing his way past Tyrone Mings to score in the 73rd minute and provide the Eagles with all three points for the second consecutive week.

Mings, on the other hand, might have been included in the recent England squad but that doesn't make him an England player.

Did you know? Ayew has scored in back-to-back Premier League games for the first time since December 2015, when he was an Aston Villa player.

Sergio Aguero: The Artful Dodger was at it again. Sergio Aguero was on the prowl against a Brighton side who had the audacity to go toe to toe with Manchester City. Aguero's two superbly taken goals were not so much picking pockets as taking candy from a baby.

Did you know? Aguero has scored 99 Premier League goals at the Etihad - only Thierry Henry at Highbury (114) and Wayne Rooney at Old Trafford (101) have scored more at a single venue in Premier League history.

Jamie Vardy: Quite apart from his goalscoring exploits under Brendan Rogers there is no doubt about it, Jamie Vardy is back to his best. His first goal was a finish of the highest order and his second was a heist. What Claude Puel did to this lad's form when he was in charge must really call into question his ability to manage at any level.

As for Bournemouth, they should have been playing against a 10-man Leicester. The tackle by Youri Tielemans on Callum Wilson was a shocker. I don't care if the player wasn't looking or, the tackle was mistimed, it was reckless and he should have gone.

Did you know? Vardy has been directly involved in 14 goals in 14 Premier League games under Brendan Rodgers (12 goals, two assists).

Crooks of the matter

Is it me or has the quality of refereeing in the Premier League fallen? I can't remember when I have seen so many outrageous decisions made by the man in the middle so early in the season. There is no doubt in my mind that VAR has made a huge difference to the dynamic of the game, but I also sense it has created uncertainty among our officials.

It should be the referee's decision that is final. Not VAR.

It cannot be helpful if every time you make a decision you are wondering what VAR has seen. Referees deserve our protection. The Premier League must follow Uefa's approach and give the referee an opportunity to view replays in the technical area in the event of a contentious issue or an obvious mistake, and let him decide whether his original decision was right or wrong.