Rangers 0-2 Celtic: What were the factors behind Old Firm win? 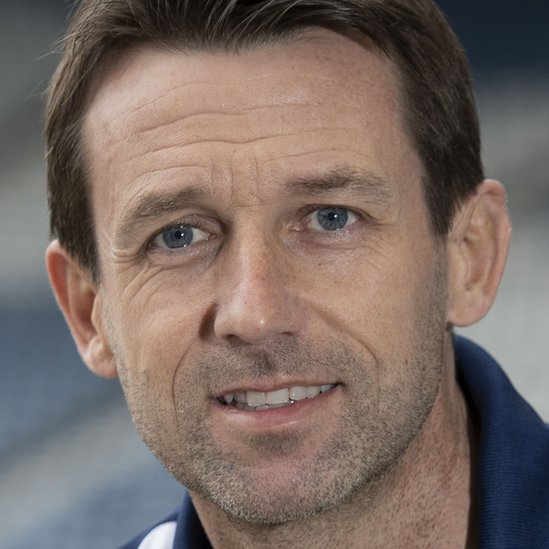 Rangers had won the previous two Old Firm games at Ibrox and were considered narrow favourites to triumph for a third time in four meetings with Celtic. But that is not how it turned out.

Instead, goals by Odsonne Edouard and Jonny Hayes earned Celtic a fourth victory in four Scottish Premiership games this season.

But what were the key factors in Neil Lennon's side doing what they had been unable to do in their last two meetings with Steven Gerrard's side on the south side of Glasgow? Former Rangers winger and BBC Scotland pundit Neil McCann offers some suggestions...

Return to form for the captain

Scott Brown was far too quiet in the last two defeats at Ibrox. He was smothered by Scott Arfield in particular, who did a really good job on him.

I felt he could be key this time because he had to have an influence as captain of this team. I looked around that Celtic team and didn't see any other natural leaders. When Brown doesn't do that, Celtic suffer, but he got himself going at Ibrox and had a huge influence on the game.

I knew right away by Steven Gerrard's starting line up that they were going to play quite narrow, sacrifice the wide areas, and then try and get runners through the middle of the park. But it became easy for Celtic to work their structure and play directly up against that because they pressed really high and asked questions of Rangers.

Gerrard's side couldn't go down the outside of Celtic because they didn't have any width. So they had to go through and that was evident through the first goal - Celtic pressed high, Connor Goldson tried to thread a pass through the middle, it got cut out, and they were punished.

Hatem Elhamed looked good at right-back, then at centre-back. I was surprised with his aggression. I wasn't sure he would be that type of player but he looked really quite comfortable in one-v-one situations and looked as though he liked a physical battle. It's always nice when you can afford one of your full-backs to go in to a centre-back position if needed and look comfortable.

I thought all the new signings acquitted themselves really well because it's a difficult environment to go to. The Celtic players dealt with it. We're talking about Greg Taylor's move from Kilmarnock to Celtic almost being done and I think Boli Bolingoli has just played his best game for Celtic in a high-pressure situation. I thought he came through it with flying colours.

Read more on GB's Evans fights back to advance

Read more on Chiefs to play 49ers in Super Bowl