Celtic will be reunited with Champions League conquerors CFR Cluj in the Europa League group stage, while Rangers have been handed a tough group including FC Porto.

The Ibrox side are also joined in Group G by Dutch outfit Feyenoord and Young Boys of Switzerland.

Celtic are in Group E along with Italian cup winners Lazio and Stade Rennais of France.

Games will kick off at either 17:55 or 20:00 BST/GMT on Thursday evenings, which means that subsequent Premiership games will be moved to Sundays.

Romanian champions Cluj inflicted a chastening night on Celtic at Parkhead, stunning the Scottish champions 4-3 in the third qualifying round of the Champions League to secure a 5-4 aggregate win.

However, Dan Petrescu's men were beaten by Slavia Prague in the play-off round of Europe's elite competition and will now face Neil Lennon's side home and away once more.

Who are Rangers' opponents? 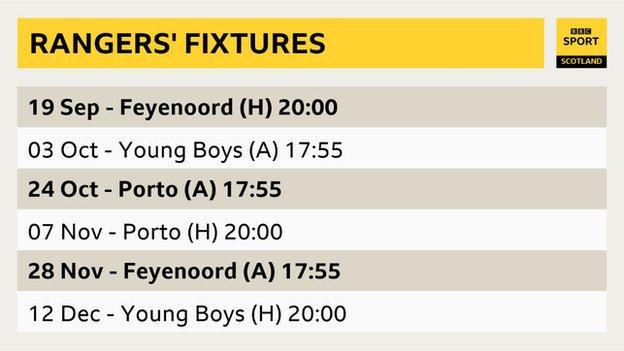 Who are Celtic's opponents? 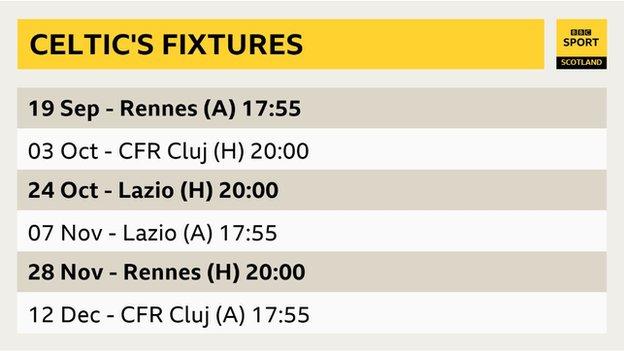 What did the managers say?

Rangers manager Steven Gerrard: "I think it is a fantastic draw, with some really tasty games in there and some nice countries to go and visit. We want to give a good account of ourselves and make our fans proud. We know we are the underdogs in the group but we want to go and surprise a few people."

Celtic manager Neil Lennon: "A couple of glamour games and the chance for some retribution against Cluj. Lazio is a great draw. A trip to Rome is something everyone will look forward to. I think we can make an impact in the group."

How much do they stand to make?

That defeat by Cluj meant Celtic missed out on the payment of 15.25m euros (£13.84m) that would have been theirs had they had reached the group stage.

Instead, both Celtic and Rangers will receive just 2.92m euros (£2.65m) each for making it this far in Europe's second-tier competition.

And all that is before gate receipts, TV money and other sundry income is added to the mix.

What about the coefficient?

So far this season, Scotland has the best coefficient score of any country in Europe - that's despite Kilmarnock being humbled by Connah's Quay Nomads and Aberdeen crashing out to Rijeka.

To put it a different way, barring last season, this season's tally is already the best score for an entire season since Rangers reached the Uefa Cup final in 2008.

It could potentially get even better, too. With a tally of 4.5 points banked already, any positive results for Celtic or Rangers would only boost that figure in the pursuit of a second Champions League place earned by climbing into the top 15 nations.

Scotland, currently ranked 19th, would earn 2.75 extra points if both Old Firm clubs mirrored their achievements from last season of four wins and three draws between them.

With the Czech Republic, Denmark, Greece, Cyprus and Croatia - all ranked higher - with just one team left in each, this could be the season Scotland climb into contention for that extra spot.