Borna Barisic scored his first Rangers goal to give Steven Gerrard's side a workmanlike Scottish Premiership win over a stubborn St Mirren in Paisley.

The Croatian left-back, restored to the side after the midweek Europa League draw with Legia Warsaw, curled in a superb free-kick on the hour mark.

It was reward for Rangers' dominance of possession but a reflection of St Mirren's ability to deny them chances.

The Buddies, though, failed to test Allan McGregor in the Rangers goal.

St Mirren will no doubt think they ought to have been given a penalty when Filip Helander collided with Jonathan Obika in the first half but have now not beaten the Ibrox side in 10 meetings, losing the last four.

Rangers briefly moved three points clear at the top of the Scottish Premiership table before holders Celtic defeated Hearts 3-1 in the afternoon kick-off after winning their opening three games of a top-flight season for the first time since 2010 - when they last won the title.

Frustration and positives for both sides

Both sides came into the game full of confidence, but their preparations could not have been more contrasting.

Rangers' midweek goalless draw in Poland not only put the Glasgow side in pole position to reach the Europa League group stage but stretched their unbeaten run to 10 games since the start of the season.

A knock picked up on Thursday meant the absence of Sheyi Ojo, but that was the only one of the five changes forced on Gerrard as the manager took the chance to freshen up his starting line-up from a squad bulging with summer recruits itching to be involved in a busy, three-competition schedule.

St Mirren's failure to qualify from their League Cup group meant they had not played in a fortnight since beating Aberdeen to record their first win in that miserable campaign.

Those three points had come on the back of Jim Goodwin being forced into his own bit of squad rebuilding and the Buddies' new manager adopted the same formation and personnel in an attempt to replicate the way they had frustrated the Dons.

The plan was almost undone within the opening seconds as Scott Arfield played in Jermain Defoe, but the veteran former England striker marked his return to the side by uncharacteristically firing wide on the turn.

Just as they had against Legia in midweek, Rangers were in control early on, but as in the Polish Army Stadium, their approach was laboured and the opposition gradually grew in confidence and ambition.

Obika's sliced cross came close to giving the hosts a shock lead as it clipped the far post with goalkeeper Allan McGregor struggling.

Helander's league debut then flirted with the concession of a penalty as he slipped and crashed to the ground along with the St Mirren striker only for referee Kevin Clancy to give the Sweden centre-half the benefit of the doubt.

Goodwin had hailed Vaclav Hladky before kick-off as the best goalkeeper in the Premiership, but the Czech had only been forced into one save - blocking a Scott Arfield header with his chest - in the hour that passed before Rangers finally made the breakthrough thanks to one moment of real quality.

On-loan Kilmarnock defender Calum Waters was teased into a foul on Defoe and Barisic curled his free-kick past a stranded Hladky in the style that had drawn him to Rangers' attention while playing for Osijek. It was officially his first goal for the club, after his effort against St Joseph's last month was awarded to Connor Goldson instead who bundled the rebound from his free-kick into the net.

Despite giving a good account of themselves, St Mirren did not look like salvaging a point until stoppage time, when Kyle McAllister's fine cross found fellow substitute Junior Morias, their midweek signing from Northampton Town, in the clear in front of goal, but the striker could only bundle the ball harmlessly into McGregor's arms. 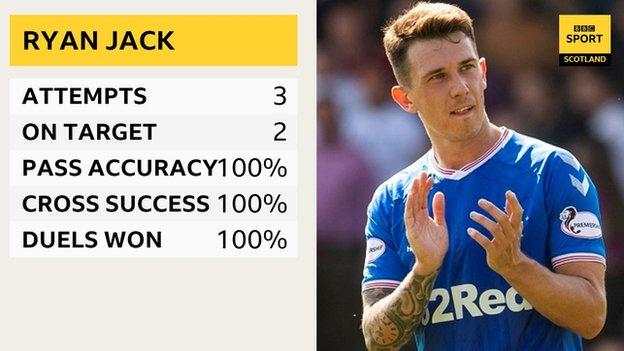 Borna Barisic scored a free-kick of which Lionel Messi would be proud but contributed little else to the Rangers cause.

His goal was all that stood between the teams, although had the referee not denied the Buddies a stonewall penalty claim, even that might not have been enough.

St Mirren produced several candidates ahead of him, including Gary MacKenzie, who must be looking like Scotland material for centre-half.

But probably the most disciplined performance came from Ryan Jack in the Rangers midfield.

He read the game with great vision going forward and screening his back four and he too may not be far from an international call-up.

Shots on Target
Home0
Away7