Hearts striker Conor Washington said he has been "surprised" by the quality of Scottish football after scoring his first club goal in 18 months.

The Northern Irishman, who joined from Sheffield United this summer, broke his Hearts duck from the spot in Friday's League Cup last-16 win over Motherwell.

Washington's strike proved the decisive goal in a 2-1 victory at Fir Park.

"Hopefully that's the monkey off my back now and I can go on and get some more," he told BBC Scotland.

Washington left the English Premier League newcomers after a single season in which he failed to find the net across 16 outings, albeit 12 came from the bench.

But in his sixth game as a Hearts player, Washington ended that barren run before praising the standard of the Scottish game.

"I knew it would be high-intensity, but I've been surprised by the quality, to be honest," he said. "The intensity is high but we've got the legs.

"Getting to the final would be absolutely brilliant for the club and us as a group of players so that's what we want to do."

Hearts and manager Craig Levein had come under fire from some supporters after a stuttering start to the season.

The Tynecastle side were underwhelming in the League Cup group stages, and lost their opening Premiership game at Aberdeen before last weekend's goalless draw with newly-promoted Ross County.

But they were deserved winners in Lanarkshire, Michael Smith's rasping strike and Washington's penalty giving them a 2-0 lead before Chris Long threatened to spark a home fightback.

"If I'm honest, 2-1 flattered them and we should've put the game to bed. But hopefully we can take this into the league now," said Washington, who was voted man of the match by the BBC Sport audience.

"We wanted to right some wrongs from Saturday where we didn't compete enough [in a 0-0 draw with Ross County] and I think we did that." 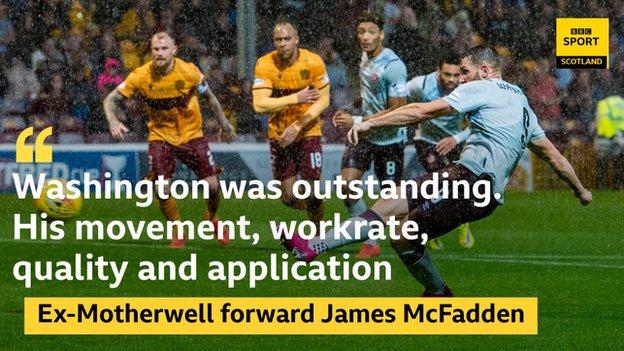 Uche Ikpeazu must be looking to Washington and thinking, 'I don't know if I'm going to get back in unless we go with two up top'.

Washington was outstanding. His movement, work-rate, quality and application were brilliant. If he continues to work that hard and offer the runs and the angles he did tonight, he will score plenty more goals, but he will also create more.

He creates space, goes into the space, takes men with him and moves again. He is always on the move.