Legal representatives of Paris St-Germain and Brazil forward Neymar, 27, have been pictured entering the offices of his former club Barcelona. (Gol TV, via AS)

Real Madrid remain interested in signing Neymar and will end their pursuit of Manchester United and France midfielder Paul Pogba, 26, if they land him. (Sun)

PSG appear to have stopped selling Neymar's shirt in their club shop. (UOL Esporte, via Marca)

Argentine forward Lionel Messi, 32, has called Neymar to try to persuade the Brazilian to join him at Barcelona rather than move to rivals Real Madrid. (Marca)

Manchester United are stunned that Pogba has suggested he could still leave the club this summer. (Mirror)

Italian champions Juventus are interested in signing Denmark midfielder Christian Eriksen, 27, on a free transfer when his Tottenham contract expires at the end of the season. (Metro)

Tottenham are willing to more than double Eriksen's wages to close to £200,000-a-week but fear even that may not be enough to keep him. (Mail)

Bayern Munich are in talks with Barcelona about signing Brazil midfielder Philippe Coutinho, 27, on a year-long loan deal that includes an end-of-season purchase clause. (RAC1, via AS)

'Like racing an Olympic rowing final in a dinghy'

Former Liverpool striker Daniel Sturridge, 29, will make decision on his future this week as he considers bids from 13 clubs, including a £60,000-a-week contract offer from Turkish side Fenerbahce. (Telegraph)

Ivory Coast forward Wilfried Zaha, 26, agreed to put his differences with the Crystal Palace hierarchy aside after team-mate Mamadou Sakho demanded he give his all in a players' meeting. (Sun)

Wales forward Gareth Bale, 30, is prepared to bide his time on the sidelines at Real Madrid until the Chinese Super League window re-opens in November or manager Zinedine Zidane is sacked. (Mail)

Liverpool will accept an offer of 15m euros (£13.9m) plus bonuses for Croatia centre-back Dejan Lovren, 30, amid interest from AC Milan and Roma. (Liverpool Echo)

Manchester United and Italy defender Matteo Darmian, 29, is set to move to Inter Milan when his contract expires at the end of the season. (Rai Sport, via Star)

Ivory Coast winger Nicolas Pepe, 24, joined Arsenal from Lille because he wanted to join a club where he could make a big impact, says the French club's president. (Sky Sports)

Liverpool cannot recall keeper Loris Karius, 26, from his loan at Besiktas after Alisson's calf injury and the German is also currently out with a calf injury anyway. (Liverpool Echo) 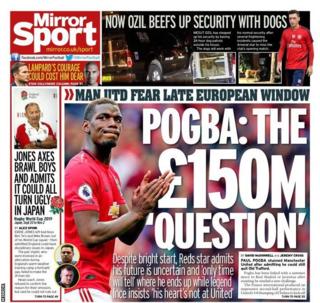