Celtic manager Neil Lennon praised the "character" of left-back Boli Bolingoli and his team's "outstanding" display after they demolished Motherwell 5-2.

Lennon acknowledged the £3m Belgian recruit is "under the spotlight" seven games into his Celtic career.

"I'm delighted with him. He's shown a lot of character," the manager said.

"He's still trying to find his feet, but as the games go on he is getting better. There were a few erratic moments we'll hopefully iron out. His second-half performance he can be delighted with."

Lennon was unhappy with his side's sluggish start at Fir Park as they struggled to keep possession and fell behind when Scott Bain allowed Liam Donnelly's volley to beat him at his near post.

Their response was emphatic, though, as the champions made it six points and 12 goals scored in their opening two Scottish Premiership fixtures.

They now turn their attention to the second leg of their Champions League qualifier with Cluj on Tuesday, having earned a 1-1 draw in Romania.

"My only criticism would be of the way we approached the game," Lennon said. "In the first 15 minutes, there were a few bad habits creeping in that we want to eradicate. We were inviting pressure we didn't need to.

"Once we solved that we were outstanding, especially to score five after the quick turnaround from Wednesday night, with five different scorers. Second half we were magnificent.

"A few of the players are still undercooked. We're not the finished article by any means but some of them are in outstanding form." 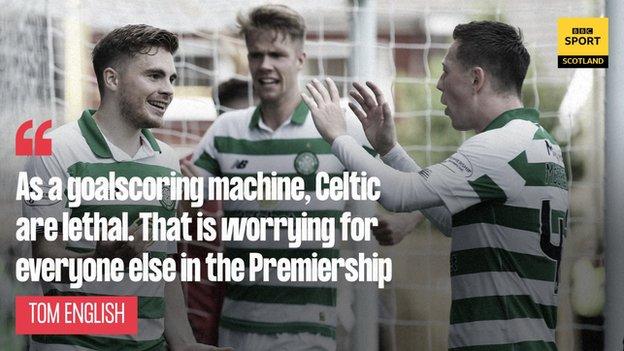