Alfredo Morelos, Joe Aribo and Nikola Katic had Steven Gerrard's side cruising before Frank Onyeka and Sory Kaba threatened to turn this third qualifying round first leg on its head.

Rangers were the better team, with Morelos' goal just before the break the lead their control merited. However, it took Arfield's calm finish 20 minutes from time to restore a two-goal advantage before next week's return.

Should they see the tie out at Ibrox, the Scottish Premiership side would face either Legia Warsaw or Atromitos in the play-off round, with those two drawing 0-0 in Poland in their first leg.

For so long now, Tavernier has been a driving force within this Rangers team. An inspiring captain he may be, but his ability to cause chaos going forward was instrumental last season.

Over the previous campaign, the right-back garnered 17 goals and 20 assists, and his creativity and willingness to get forward made the difference in Denmark.

Two minutes before the interval it was his pinpoint cross from the right that unlocked a Midtjylland defence, marshalled by former Celtic centre-half Erik Sviatchenko, that just about looked capable of keeping Rangers at bay. The ball dropped perfectly on to the head of Morelos, the Colombian nodding under Jesper Hansen.

And it was Tavernier's neat pass that was the catalyst for his side's potentially crucial fourth, allowing Morelos to steer the ball back into Arfield's path. The Canada international was the coolest man in the place to roll it nonchalantly into the net.

Even as Rangers were rocking, Tavernier managed to steady a ship that was in danger of capsizing. How they managed to go to that from cruising will be the only cause for concern for manager Gerrard. 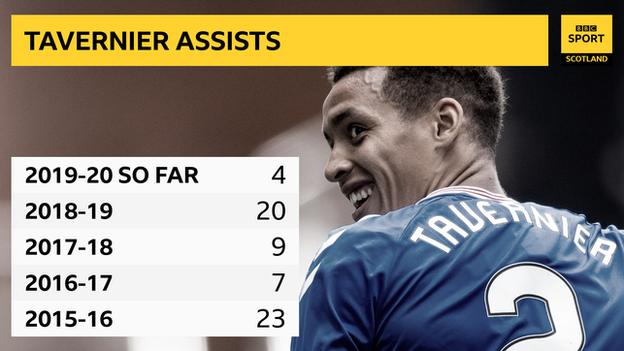 Until that point, it was plain sailing. Midtjylland struggled with Rangers' pace all night and it was the lung-bursting speed of Jordan Jones that led to the second goal. The Northern Irishman marauded his way through the centre of the pitch on the counter before slipping a neat pass out to Aribo, and the 23-year-old scudded a low shot across Hansen and into the far corner.

In truth, there was quality in each of the Glasgow side's goals, with the unlikely figure of centre-half Katic arrowing a fine drive through a ruck of players to make it three as the hosts failed to clear their lines.

From there, it all very nearly fell apart. Almost instantly Onyeka failed to take advantage of a cutback six yards out, only to then be afforded enough time to compose himself, swivel and shuttle the ball beyond Allan McGregor. Then, just two minutes later Kaba's drive from the edge of the box brought the MCH Arena to its feet and Rangers hearts to sink.

However, thanks to Arfield's late intervention, the Scottish Premiership side will return home content in their night's work, and buoyed ahead of Thursday's return.

'Only negative is the sloppy goals' - analysis

The only negatives for Rangers are the goals they conceded, both of which were quite sloppy. But Rangers grew into the game and finished it very strongly. Jordan Jones was superb tonight - especially when you can carry the ball such a long distance.

Rangers were ruthless tonight and their goals were outstanding. There were some brilliant individual performances. To go away from home and score four goals against a team we thought could be tricky, that was brilliant.