Hearts say their Tynecastle pitch is ready for "elite-level football" despite an image emerging of the surface following a recent concert.

The Scottish Premiership club hosted the Edinburgh Festival's opening concert on Friday night, with 15,000 in attendance.

But a photograph on Twitter shows discoloured patches over a large area ahead of Saturday's Ross County match.

"The de-rigging of the event was completed on schedule," the club said.

"Our pitch consultants, STRI Group, were contracted to advise and manage the pitch protection process on our behalf, working throughout with our own groundstaff.

"We have always known that the event would have an impact on the aesthetics of the pitch - however, there would be no impact on its playability.

"Indeed, as we expected, independent testing carried out post-event has revealed that the traction (or stability of the pitch) is well within the acceptable parameters for elite-level football and the pitch firmness is optimal for play.

"In short, there have been no unforeseen issues relating to the pitch and the first team will train on it, as usual, on Friday." 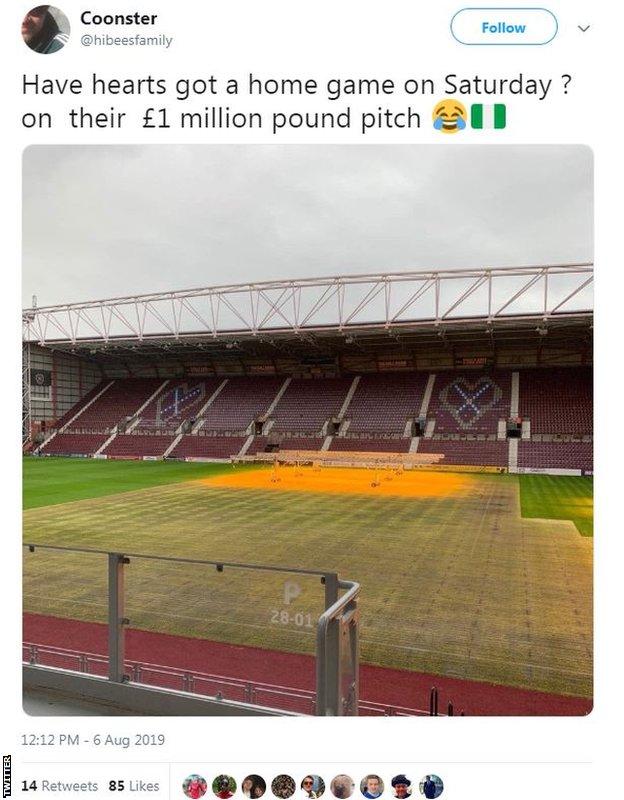 Last summer, Hearts spent close to £1m on a new hybrid pitch, with the club saying it was to give "Craig [Levein] and the first team the best playing surface possible".

Meanwhile, former Hearts left-back Gary Naysmith has returned to the Scottish Premiership club to manage young players being sent out on loan.

The 40-year-old was replaced as manager by Championship outfit Queen of the South in May after they finished in the relegation play-off place.

Naysmith believes his new role will "grow in importance" at football clubs.

"In the English Premier League, every club has a loans manager," he said. "A few teams in Scotland have them too."

Hearts currently have one player on loan - 20-year-old Bulgarian defender Alex Petkov has joined League One side Clyde until January.