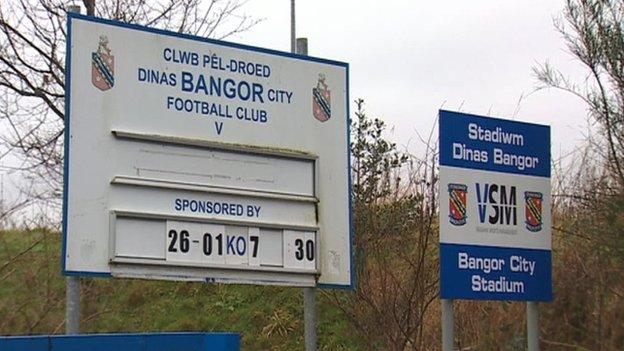 Bangor City, along with Holywell Town and Llandyrnog United, will not be able to play competitive games until after an arbitration hearing on 16 August.

An independent panel will hear Bangor's appeal against alleged breaches of Football Association of Wales rules.

Bangor could face relegation from the Cymru North if their appeal against points deductions fails.

That could possibly cause a knock-on effect for lower division sides Holywell and Llandyrnog.

Both Holywell and Llandyrnog finished third from bottom - just above the relegation zone - of their respective divisions, which have been rebranded for the 2019-20 season as the Welsh National League Premier Division and Welsh Alliance League Division One.

The FAW has temporarily suspended all three clubs "in order to protect the sporting integrity of the competitions that these three clubs are scheduled to participate in".

The three clubs may not be able to start their seasons until up to a maximum of seven days after the judgement of the arbitration hearing.

Bangor were demoted from the top tier Welsh Premier League at the end of the 2017-18 season after being refused a domestic licence.

In May 2019, the Citizens - now playing in the second tier Cymru North - were charged with alleged breaches of FAW rules, although an initial 42-point deduction was halved on appeal, sparing relegation.

The club then launched a second appeal against that 21-point deduction, although they now also face a fresh FAW charge of fielding an allegedly ineligible player.

The Citizens only avoided relegation on goal difference, so any further punishment - which relates to their match with Prestatyn Town on 22 March - could see them drop into the third tier Welsh Alliance.

Bangor were also fined £700 over the previous charges that included fielding ineligible players.

A statement on the club website said Bangor "will continue to prepare for the new season, awaiting the decision of the hearing".

In June 2019 the club staved off a High Court winding up order for the third time in 12 months.

The previous month, Bangor City FC Supporters Association (BCFCSA) voted in favour of forming a new club, concerned by the way Bangor was being run.

The new club - called Bangor 1876 - was granted permission by the FAW to begin life in the fifth-tier Gwynedd League this season.

If the hearing goes against Bangor, the club believes they could still take their case to the Court of Arbitration for Sport.