The former England striker finished twice in five minutes, before Daryl Horgan pulled one back.

But after the visitors had Sean Mackie sent off for a handball, Defoe nodded in his third, Alfredo Morelos scored two and Sheyi Ojo completed the rout.

Rangers join rivals Celtic as the only team to make a 100% start.

Manager Steven Gerrard made three changes after his side's impressive 4-2 win away to Midtjylland in the Europa League midweek, including Defoe coming in for Morelos.

And the striker spearheaded an electric start by the hosts, as he was alert twice in the box to finish smartly and put Hibernian firmly on the back foot.

For the first he showed his poacher's instinct has yet to dim at 36, as he was the first to react as Ofir Marciano parried Ojo's long-range strike. And five minutes later he pounced at the front post as Ojo's cross came in from the left after brilliant work by Jordan Jones.

Gerrard would have been frustrated due to his side passing up further chances and then, as it had done in midweek, a defensive lapse cost them. Scott Allan's superb pass caught Connor Goldson and Nikola Katic cold and teed up Horgan to slot home and give Hibernian a glimmer of hope.

But after Mackie's handball earned him a second booking 10 minutes into the second half, the chances of a comeback by the Edinburgh side were greatly reduced, and Rangers were ruthless in punishing the 20-year-old left-back's rush of blood.

First Defoe nodded in Steven Davis' cross to wrap things up, before being replaced by Morelos who finished emphatically twice to give Gerrard a welcome selection headache for Thursday's Europa League return against Midtjylland. 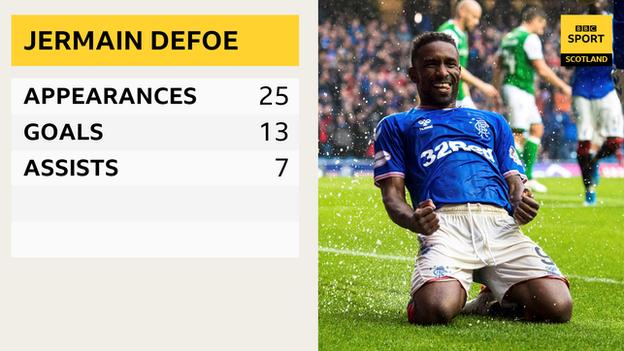 Shots on Target
Home19
Away3