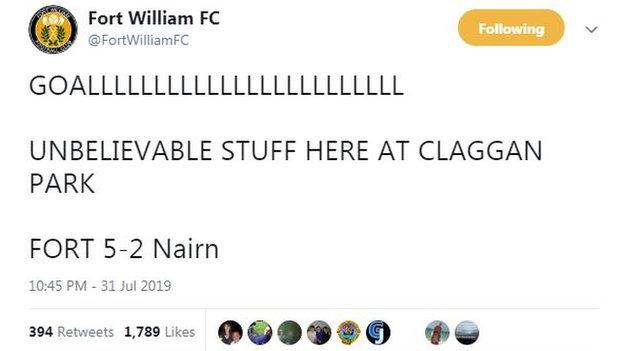 The Highland League side, who had a minus 224 goal difference last season, triumphed 5-2 against Nairn County in the North of Scotland Cup.

Prior to this win, their last victory came four campaigns ago when they defeated Strathspey Thistle 4-1.

"And we would like to thank everyone online, around the world who have celebrated with us. Your support doesn't go unnoticed."

Within minutes of the final whistle the club, whose 1800-capacity ground is nestled in the shadows of Ben Nevis, was trending on Twitter as word spread of their famous victory.

"Fort William trending. What a time to be alive," said David Childs, while SteveSeagull wrote: "Well done, it's like the man on the moon, you always know where you are or were when Fort William won."

Last week Fort announced a tie up with Inverness Caledonian Thistle and the loan of nine players. At least two were on target at Claggan Park.

A BBC Scotland documentary, The Fort, followed the club's disastrous run last season that delivered just two draws and a minus seven points finish due to a deduction for fielding an ineligible player three times.

Fort William midfielder Scott Hunter took to Twitter ahead of Wednesday's game, writing: "Thanks to everyone for their comments, support and love for the BBC doc and Fort William FC.

"Eyes of the world are on our result tonight."

In February the bottom side were actually leading a game at half-time, only for it to be abandoned due to a waterlogged pitch.

The part-time club pays its players an average of £20 a week.

You can watch 'The Fort', the story of Britain's worst football team, on the iPlayer.