Danny Denholm plays for part-time for East Fife in Scotland's League One and is also a PE teacher in Dunfermline. Previously, he was a full-time footballer with Livingston before dropping down the divisions. Here, he explains how football's fine system works...

Since I've started playing professional football, I've got to grips with most things. The dog-eat-dog nature of the dressing room, angry managers, and cold midweek trips to Stranraer or Elgin. But one thing that continues to have the upper hand on me is the dreaded fine system.

In dressing rooms across the country - from top-level professional to non league - there will usually be a player-led fine system in place with the purpose of maintaining discipline and standards. There's also the small matter of funding the Christmas night out.

The fines can be for very different offences. There are always fines for being late for a match (£25), forgetting your boots (£10) and failing to inform the physio of an injury on the day of the game (£20). These sound pretty reasonable and sensible, right?

On the other hand, I now find myself at East Fife, where you're due a fine if your body hair is not trimmed to an appropriate level. Now, nobody is out with the ruler measuring the length to the nearest centimetre - it appears to be done at a glance and at the discretion of the fine committee. Interestingly, this has led to a hairy protest by some team members who will remain unnamed.

Another interesting one is the £3 fine for blazing a ball over the wall at Bayview, whether in training or a game. The mere possibility of having to open my wallet has led to me side-footing the ball very softly in every shooting drill. It's a different story on a match day, though.

Against Stenhousemuir in the League Cup last summer, our midfielder Scott Agnew was on a hat-trick and lined up a trademark lacer... only to smash it into the car park. A huge cheer erupted from the players on bench. "Yaaas! Another £3!". No wonder the crowd were bemused. 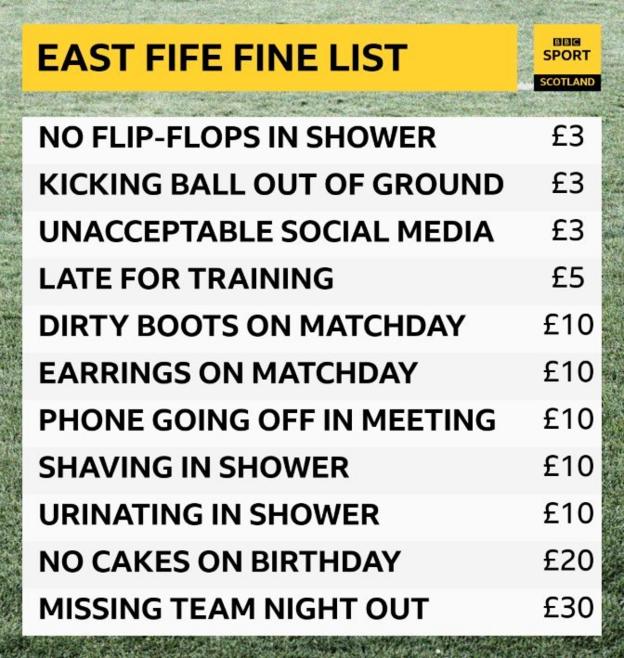 'You can appeal, but it's a kangaroo court'

A fairly new addition to the fine sheet is the "unacceptable social media post" category. I have been a long advocate of this rule. Some of these gushing tweets are stomach-churning. Not that it stops me doing it myself from time to time. We're all human, after all, but let's at least save it for after a goal rather than just an assist.

Another interesting dimension is the appeal process. A player can contest his fine in front of an entirely impartial jury made up of a handful of senior players, within the confines of the dressing room, with all other players present. A kangaroo court? Maybe just a bit.

It is safe to say any player willing to take his appeal to this court is either naive or an idiot. If their appeal is turned down - and it will be - they will have to pay double. They may have a valid point but when the jury stands to benefit to the sum of a round of drinks, they have absolutely no chance. Fine doubled and lesson learned.

The higher up the club, the higher the fine. I've heard stories of Scottish top-flight players paying fines well into the hundreds and it seems even crazier south of the border. I read somewhere that Sergio Aguero used to turn up for training late regularly and used to nonchalantly chuck £10,000 into the fine kitty for this offence at Manchester City. It's all relative, I guess.

This couldn't be any further from the attitude I adopt. When my car pool are running late to our pick-up point at the Rosyth park and ride, I go into full-scale panic mode. Heart palpations and sweat lashing from my forehead at the mere thought of having to part with a £10 note. The prospect of seeing the smug face of defender Chris Higgins as we saunter in two minutes past the meeting time pours even more salt in the wound.

The fine system may sound a little over the top, but it does serve a wider purpose. It's crucial in fostering camaraderie and discipline but, more importantly, it sets standards.

I've been in dressing rooms where the fines were not being enforced and it doesn't bode well for what happens on the pitch. Some players, consciously or otherwise, get sloppy. It starts with being five minutes late here and there, or leaving kit at their feet, and before long this culture spreads through the whole dressing room. Standards start to drop on the pitch, the professionalism dwindles and players start blaming everybody but themselves.

The fine system helps create a professional environment, and allowing the players to police their own dressing room develops leadership and responsibility. The laugh you get with it is just a useful by-product.

Mind you, after writing this, I'm now probably going to be fined £3 for another attention-seeking blog...