Everton have told Crystal Palace they are prepared to bid £60m and include 28-year-old Turkey striker Cenk Tosun as part of a deal for Ivory Coast forward Wilfried Zaha, 26 - but fear they could miss out to Chelsea. (Telegraph)

Tottenham chairman Daniel Levy has told manager Mauricio Pochettino he will back him in the transfer market after securing a new £320m shirt sponsorship deal, with the club preparing an £80m bid for Juventus and Argentina forward Paulo Dybala, 25. (The Times)

Leicester's 23-year-old English winger Demarai Gray says there is "nothing to worry about" over Maguire and does not believe the defender, 26, is disgruntled that there has been no movement regarding his future. (Leicester Mercury)

Wolves are in talks to sign Real Madrid's Spain Under-21 defender Jesus Vallejo, 22, on a season-long loan, while the club are also close to agreeing a £17m fee with AC Milan for the 21-year-old Italian striker Patrick Cutrone. (Mail)

Liverpool manager Jurgen Klopp has dismissed Real Madrid and Wales forward Gareth Bale, 30, as a potential transfer target, insisting he is focused on building a team rather than acquiring individuals. (Independent)

Where did it go wrong?

Gareth Bale: Why did Real Madrid fall out of love with the forward?

Manchester United are preparing for 26-year-old France midfielder Paul Pogba's departure and are closing in on a £70m move for Lazio's Serbia international Sergej Milinkovic-Savic, 24. (Mirror)

However, Pogba could actually stay at Old Trafford for at least another year, which would scupper any move for Milinkovic-Savic (Express)

Aston Villa are on the verge of making their 11th signing of the transfer window - and taking their summer spending to £120m - with an £11m move for Club Bruges and Zimbabwe midfielder Marvelous Nakamba, 25. (Telegraph)

Juventus and Portugal forward Cristiano Ronaldo, 34, will not be able to persuade Paris St-Germain striker Neymar to move to the Serie A side- because the 27-year-old Brazil international has his heart set on rejoining Spanish giants Barcelona. (Star)

Manchester United have been told they will have to spend more than £30m on Newcastle's 21-year-old English midfielder Sean Longstaff. (Manchester Evening News)

Meanwhile, the agents of Lille and Ivory Coast winger Nicolas Pepe, 24, have been in Naples to discuss a possible transfer to Napoli. The Italian club would also throw in Algeria midfielder Adam Ounas, 22, in a deal worth more than 82m euros (£73m). (Gazzetta dello Sport - in Italian)

Nice winger Allan Saint-Maximin, 22, could become Steve Bruce's second signing at Newcastle United after the club bid £20m for the France Under-21 winger. (The Sun)

The Magpies are also close to signing former Chelsea midfielder Kyle Scott, 21, on a free transfer. Scott has played for the England Under-16s, Republic of Ireland Under-17s and USA Under-18s and Under-20s. (Newcastle Chronicle)

Aberdeen forward Stevie May's hopes of returning to hometown club St Johnstone look to have ended. The 26-year-old Scot had passed a medical earlier in the week but talks stalled between the clubs. (Daily Record) 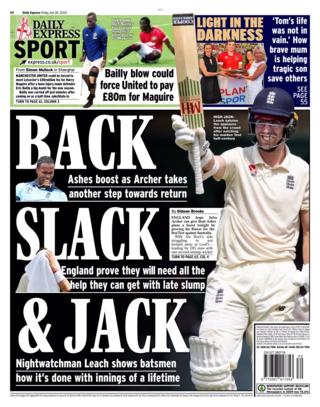