St Mirren are out of this season's League Cup after once again being taken to penalties by lower-league opposition.

Just three days after losing to East Kilbride from the spot, Jim Goodwin's men scraped a 4-3 shootout win after a 0-0 draw at Albion Rovers.

Despite the bonus point against League Two Rovers, it means the Paisley club's last-16 hopes are dashed.

There was still room for a few upsets across the 11 games, however, as Dundee United were stunned in a 2-0 defeat to East Fife and Lowland League side East Kilbride edged out Edinburgh City.

The eight group winners and the four best runners-up all advance to join Scotland's four European representatives in the last 16. 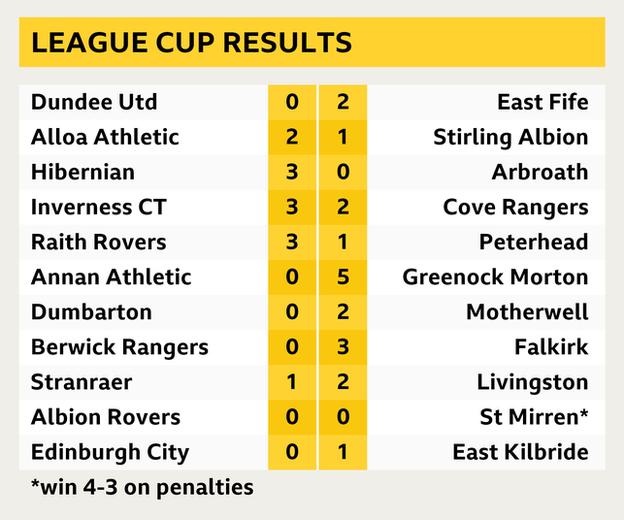 No fun in the sun for Saints

The mercury may be soaring across the country but St Mirren once again left their fans feeling cold in the League Cup.

The Scottish Premiership side travelled to Coatbridge knowing anything but three points would effectively rule them out of the tournament. In the end, it was the same old problem for Goodwin's team who struggled to put the ball in the net in the Lanarkshire sunshine.

Saints got off to a worrying start when Cammy MacPherson went off injured after just five minutes. Before half-time, Jack Baird struck the post, while Scott Roberts did likewise for the hosts in the second period.

Cammy Breadner's ball was turned into his own net by an Albion defender, only for a flag to be raised. Both sides then limped on to penalties with Saints holding their nerve to edge the tie.

Despite taking the extra point, the complicated permutations across the remaining fixtures mean it would not be possible for the Paisley side to advance.

"We are all very frustrated," said Goodwin.

"I don't know whether it is a hangover for a lack of confidence from last year. They weren't renowned for scoring goals last season. I don't know if that is a symptom that has come over.

"I said to them there it is a fresh start for everybody and we need to show a bit more belief, a bit more courage, a bit more creativity and imagination in the final third. In the second half it just whimpered out.

"I can't fault their efforts. It's just not been good enough in front of goal."

No rough ride for Motherwell

This season's League Cup surprise package has been Motherwell. Going into the game away to Dumbarton, Stephen Robinson's side had won two games, scored seven goals and conceded none.

Thanks to goals from Christian Ilic and Peter Hartley that impressive run continued as they moved to within touching distance of the last 16 by beating Dumbarton 2-0.

While the Fir Park pitch may resemble a bowling green these days, Dumbarton's rather long surface slowed the game down as they struggled to get into their stride, with it taking 42 minutes until Ilic opened the scoring.

However, the 1,200 travelling fans were sent home happy as captain Hartley finished things off.

"The pitch wasn't great as they didn't cut it, but I thought we dealt with the pitch and the situation well," Hartley said afterwards.

"We wore them down, took two chances but maybe it could have been more on the night."

Elsewhere for the top-flight sides, Flo Kamberi, Scott Allan and Fraser Murray were all on target for Hibs at Easter Road to see off Arbroath, a result that puts the hosts top of Group C.

It was less straightforward for Livingston, though, who only just edged out Stranraer at Stair Park. Steven Lawless opened the scoring for the visitors before Aymen Souda doubled the advantage before the break. Cameron Elliott would pull one back for the hosts as Livi top Group G.

Dundee United missed the chance to all but secure passage to the next round as League One East Fife recorded their first win at Tannadice since September 1946.

Aaron Dunsmore and Liam Watt were on target for the visitors, who still have a chance of progression with a game to go against Hearts.

Five fixtures will take place on Wednesday night as the League Cup group stage creeps towards its conclusion. Hearts host Stenhousemuir, while Ross County can make secure top spot in Group B with victory over Forfar Athletic. St Johnstone, who are effectively already out, host Brechin City.