Yet it appears his time at the Bernabeu is set to come to an end, with many fans happy for him to leave and manager Zinedine Zidane saying it would "be best for everyone" if the 30-year-old were to find a new club.

From the outside it seems bizarre - how can a player who would ordinarily be considered a club legend with all his goals and trophies be so unwanted?

Leaving aside the high demands of Real supporters - who also booed Cristiano Ronaldo at times, don't forget - BBC Sport takes a look at the Welshman's six years in Madrid.

So many trophies and plenty of goals

When Real signed Bale from Tottenham in 2013, they had not won the Champions League since 2002.

With the Welshman, they won it four times in the following six seasons, only failing to lift European football's most coveted prize twice, including in 2018-19.

Remarkably, that means Bale has been involved in 30% of all of the club's European Cup successes.

To compare him to other recent Real icons, he has won more Champions Leagues than Raul (three), current manager Zidane (one), Luis Figo (one) and Brazilian Ronaldo (zero).

Bale managed only two fewer goals than Brazil hero Ronaldo and scored two more than Fernando Morientes did for Real between 1997 and 2005. His minutes-per-goal record (163) beats Raul, whose 325 goals in 741 games took 184 minutes each.

Perhaps surprising - given how Zidane was considered such a huge part of Real's recent history - is the fact Bale has played four games more for the club than the Frenchman and scored more than twice as many goals. Zidane had 49 goals in 227 games. Their assist levels were similar, with Zidane setting up 66, one more than Bale.

Unfortunately for Bale, his records are made to look human by Cristiano Ronaldo's 450 goals and 131 assists in 438 games, a goal every 84 minutes.

A man for the big moments

He scored in two separate Champions League finals - including arguably the greatest European Cup final strike ever scored - and netted in a shootout in another.

He also scored a stunning winner in one of only two El Clasico Copa del Rey finals since 1990.

Here are his five best moments in a Real jersey - with three coming in his first season after a then world-record £85m move. 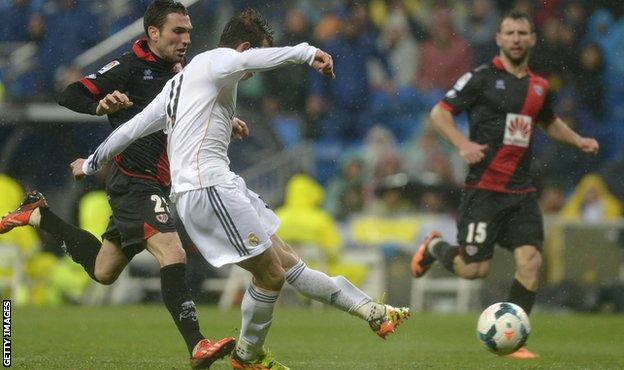 Out of Bale's 78 La Liga goals, this was arguably his best. Seven touches were all he needed to run 70 yards with the ball and score.

He was just outside his own box when he latched on to a headed clearance. His first touch took him in between two Rayo Vallecano players. Two more later and he was in the opposition half, before cutting inside a defender and slotting home from the edge of the box.

He would score nine goals in seven games against Rayo, including four in a 10-2 win the following year. 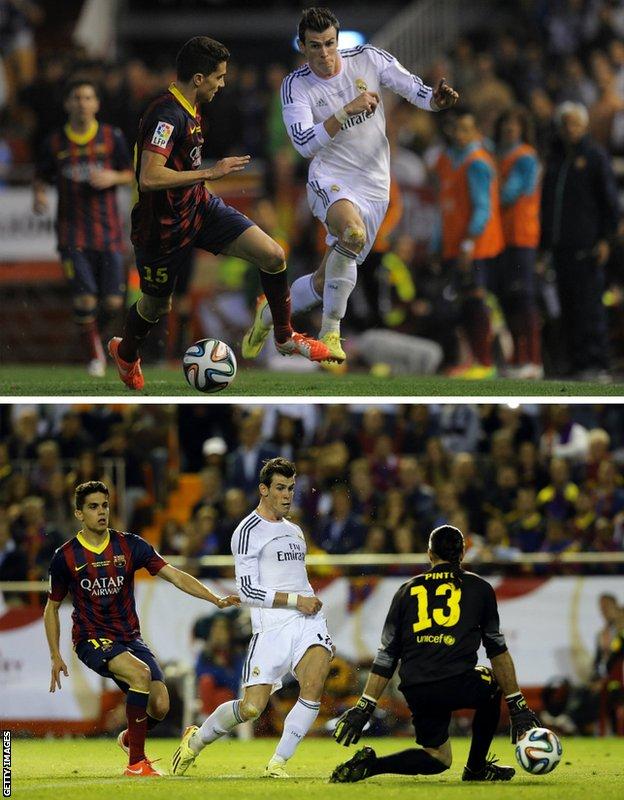 Bale marked his first Real final with one of the greatest El Clasico goals.

With five minutes remaining, Bale ran from his own half, nudging the ball past Marc Bartra and then arcing his run off the pitch to speed past the defender before cutting inside and slotting the ball between the legs of keeper Jose Manuel Pinto.

"I have never seen anything like it. It looked like the ball was going out, but he kept pushing and ran off the field to get it. It was amazing," said then team-mate Xabi Alonso. 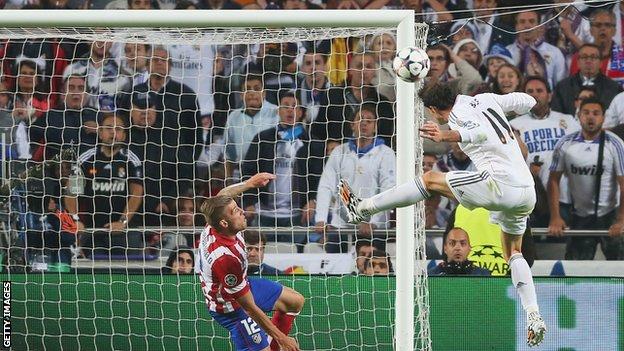 Bale headed in what would prove their 110th-minute winner against Atletico before two late Real goals gave the game a deceptively comfortable-looking scoreline. 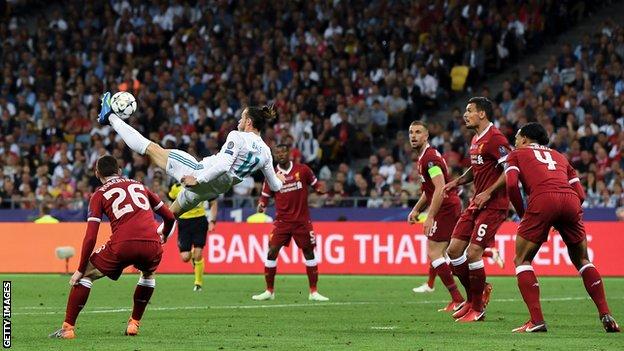 Bale's greatest moment came in last year's Champions League final against Liverpool, with the 61st-minute replacement for Isco becoming the first substitute to score twice in a European Cup final.

Two minutes after coming on, he sent an unbelievable bicycle kick past Loris Karius to give Real a 2-1 lead, in a goal up there with the greatest scored in any European game - or any final.

His second goal - which came from 30 yards and was fumbled in by Karius - helped seal Real's 13th European Cup. 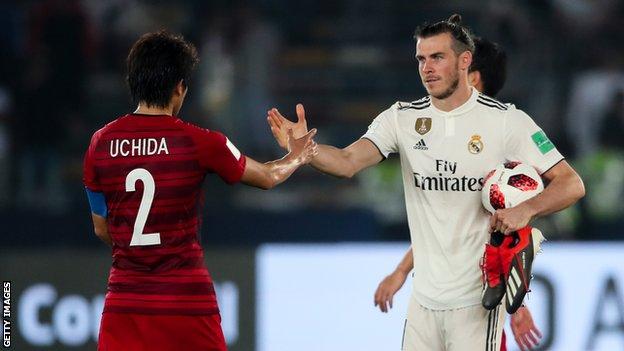 In a final season with few high points, Bale scored a hat-trick in the Club World Cup semi-final - a tournament Real take seriously. Only Cristiano Ronaldo and Barcelona's Luis Suarez have scored trebles in that cup.

The Welshman opened the scoring via the post, tapped a second into an empty net and then smashed in a third from a tight angle.

Bale won all three Fifa Club World Cups he played with Real - he was injured for the 2016 event - scoring six goals in as many games.

Former England winger Steve McManaman managed just over half of Bale's trophy haul with two Champions Leagues, two La Liga titles, one Uefa Super Cup, one Intercontinental Cup and one Spanish Super Cup - all with Real. He managed only 14 goals though.

Kevin Keegan managed 43 goals for Hamburg and won the Bundesliga, although he achieved one thing Bale never did; winning the Ballon d'Or - twice.

Scot Paul Lambert became the first British player to win the European Cup with a non-British side in 1997 when Borussia Dortmund beat Juventus - while Chris Waddle lost the 1991 final with Marseille.

Waddle won three Ligue 1 titles in a row and was named Marseille's second greatest player of the century by the fans, behind striker Jean-Pierre Papin.

But despite surpassing all those achievements, it seems Bale's departure from Real will elicit little emotion from the club's fans or manager.

"Zidane is a disgrace - he shows no respect for a player that has done so much for Real Madrid," Bale's agent, Jonathan Barnett, told AFP.